A traditional and massive highlight of the annual Dressage and Jumping with the Stars program is the announcement of the Champion of Champions. Earlier today, the champion of each age group were determined after their performances over the past three days. The Champion of Champions was determined by a guest rider giving each horse a trial over a series of jumps and making an overall general assessment of each horse.

Firstly, here are some details about each of the age group champions.

The winner of the Trailrace Saddlery Australian Young Jumping Horse 4-year-old Championship was Clasique Emerelda. Details for this horse are as follows:

We were told that this horse has the same nuances as her dam. Tom McDermott said that this was only the third show that this horse has been to and in fact, was only competing at Werribee as there had been some shows washed out in Sydney. The horse will now be turned out for a rest for a while, to give it a chance to physically mature, prior to being brought back into work at in the future. 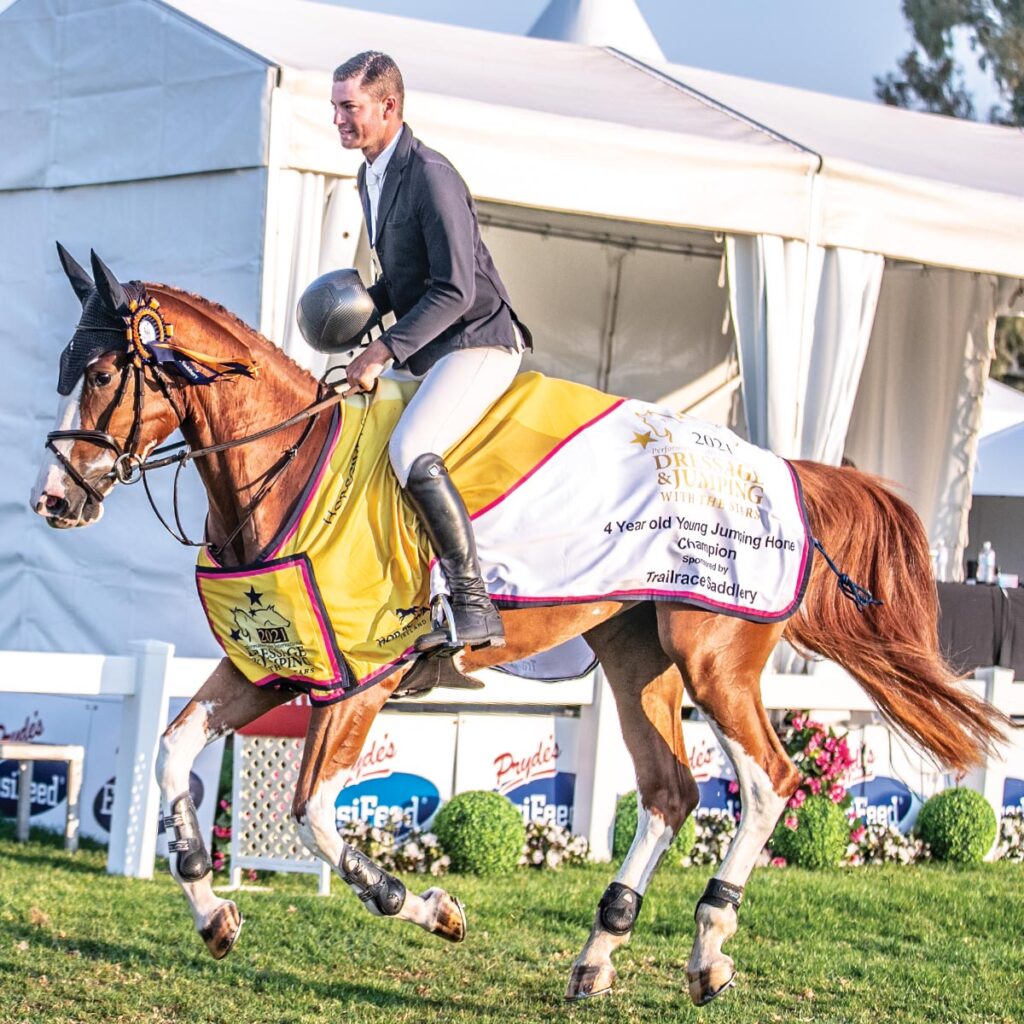 The winner of the Fleet Plant Hire Australian Young Jumping Horse 5-year-old Championship was Tulara Dakchico. Details for this horse are as follows:

Billy Raymont told us that this horse had only been attending shows since December last year and that this was only his sixth show. Billy said that he saw the horse as a youngster at Mark Fraser’s Tulara Stud and made a 6 hour round trip back to the property to buy him. Billy thanked his partner Tess Cook who has helped by contributing to the development of various aspects of the horse.

The winner of the Pryde’s Easifeed Australian Young Jumping Horse 6-year-old Championship was Cera Cadbury Z. Details for this horse are as follows:

The owner, Caroline Price told us that she purchased this horse when it was only two days old. When Victoria was locked-down due to Covid-19, there were no shown on, so she sent the horse to Billy Raymont in Queensland. In her words, it went to Queensland as a 0.90m horse, and came back as a 1.15m horse.

Caroline explained that the horse would be given a 4-6 week break, after which it would compete in a couple of local shows, before being sent to Queensland to compete in the World Cup shows, scheduled for late June.

The winner of the Parkridge Hay Australian Young Jumping Horse 6-year-old Championship was Yalambi’s Jadore. Details for this horse are as follows:

George Sanna said that he first saw the horse as a four year old at the Summer Classic, being ridden by Tom McDermott, soon after the horse had arrived from Western Australia.

He really liked the look of her and soon after she was purchased by Chatham Park. She has won the Futurity at SIEC, which George considers to be probably the most important Futurity in the country and that she is now jumping around 1.40m.

Her rider Kate Hinschen said that she was a quality mare that is easy to work with. She has good rideability and is brave. Kate said their next competition would be at Sydney Royal in about 2 week’s time. 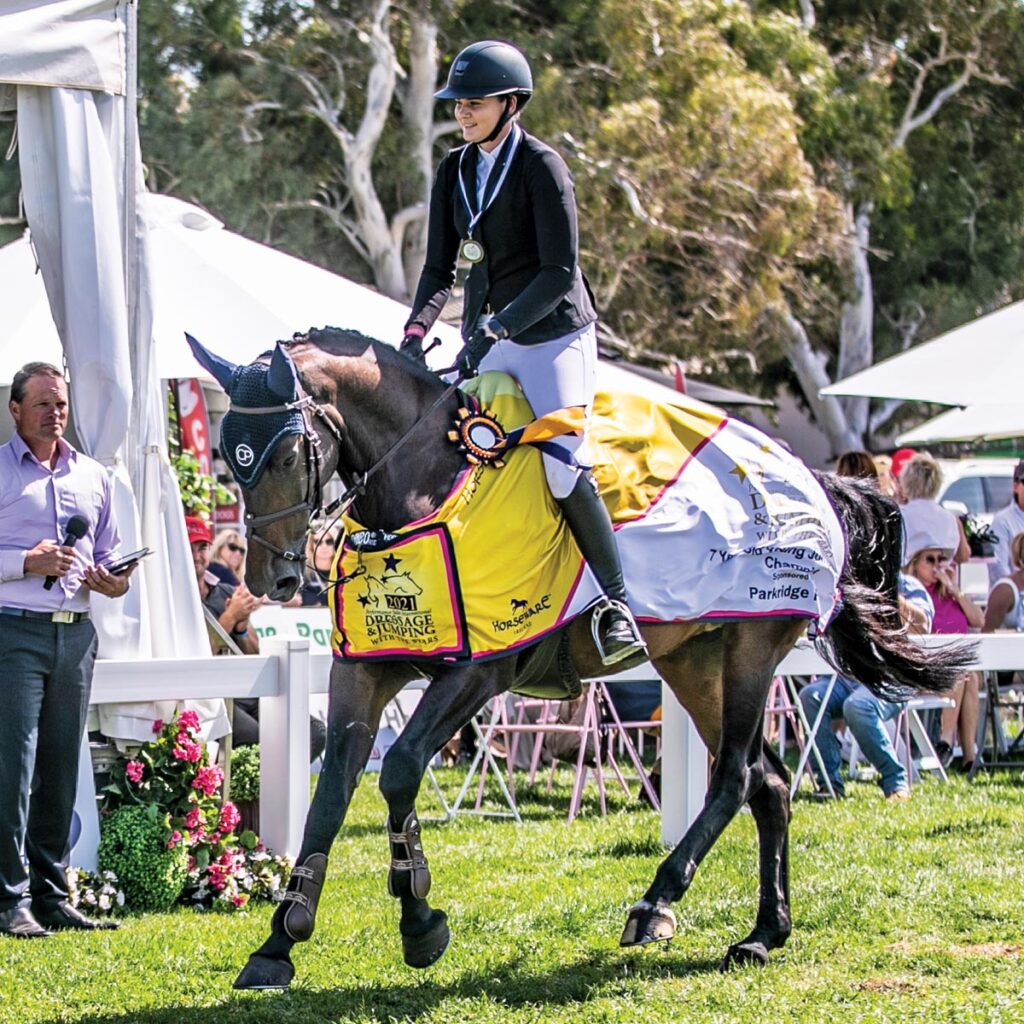 Each of the horses was ridden by Nicole Bruggemann who was one of the Young Jumping Horse Championship judges. Nicole has had much success on the South Australian Jumping scene, having success at Junior and Young Rider levels, including state Junior, Young Rider and Senior Titles and was the Australian Young Rider Champion in 2015. 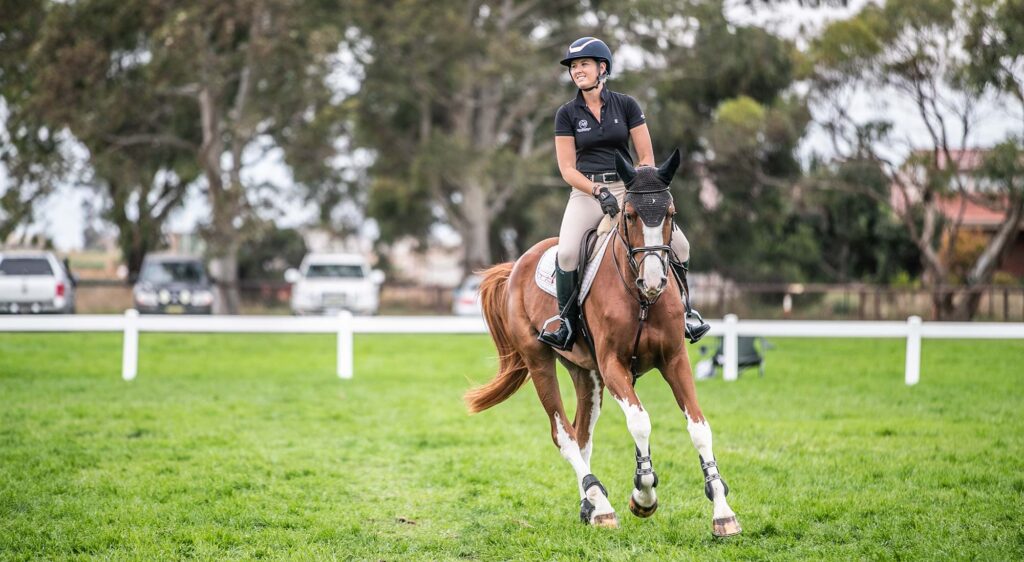 Finally, it was time to announce the winners.

Firstly, the Lara Tweedie award for the best presented horse in the Champion of Champions went to Tulara Dakchico 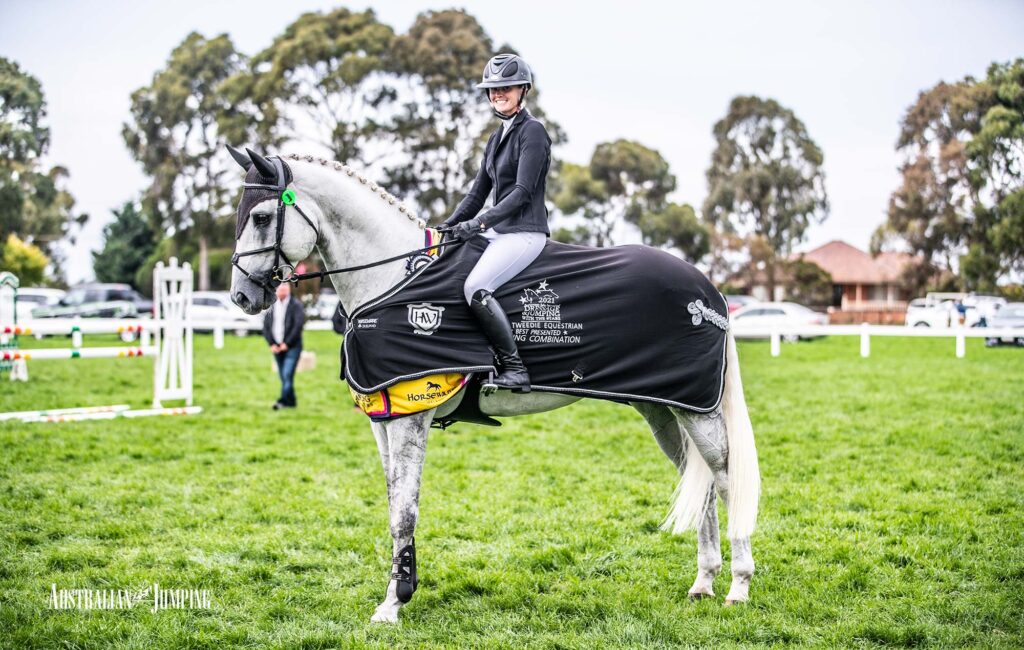 Thanks goes to the sponsors of this award, International Horse Breeders (IHB). Not only does the winner get added to the perpetual trophy, but the prize for first place includes a service to the wonderful sire Balou Du Rouet, who had two progeny (Celso and Cavalier Du Rouet) in the World Cup Qualifier earlier in the afternoon.

Congratulations goes to Cera Cadbury Z and all connected with the horse.