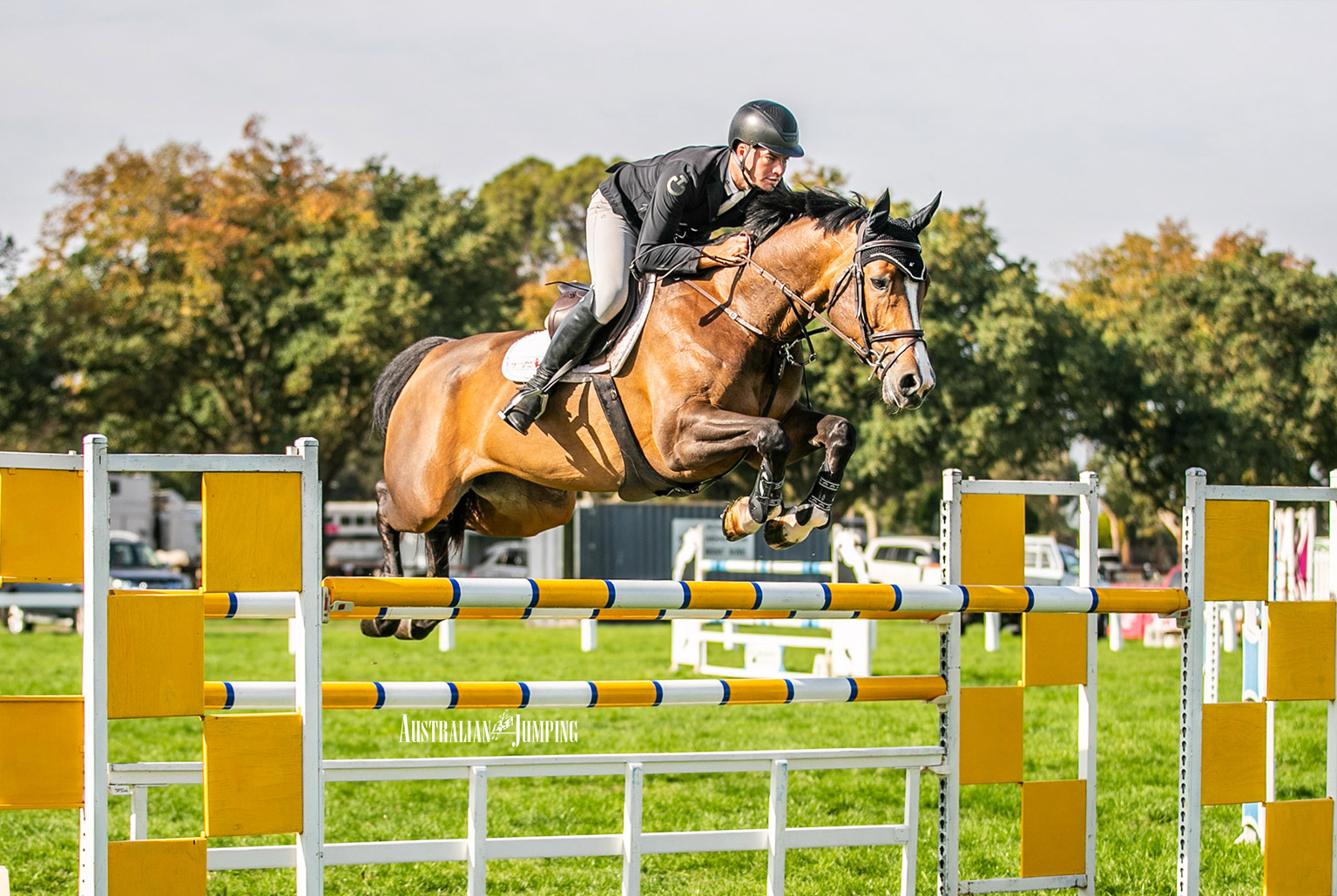 Above: Tom McDermott and Elegance De La Charmille – 2nd place in Round 1 of the Current Stars today

After a Covid-19 enforced cancellation of the 2020 edition of the PSI Dressage and Jumping with the Stars (D&JWTS), the much-anticipated 2021 version of the event got underway this morning at the Werribee Park National Equestrian Centre. Sponsored by Performance Sales International (PSI), the main focus of the jumping portion of the program is on the young horses. Separate competitions are held for 4, 5, 6 and 7-year-olds while there is also an open competition for the “Current stars”. The highlight of the weekend will be held on Saturday with the first round of the 2021 Australian World Cup Series.

Young Horse classes are run under a different criteria to regular jumping competitions (where the number of rails down and the time taken are all that count). The young horse classes today were decided by a combination of the judges’ assessment of the performance with rails down being deducted from scores.

Horses are judged on jumping technique, scope over fences and rideability between fences, i.e., the correct number of strides between related distances, being on the bit, changes, etc. General impressions are also recorded, taking into account attitude, focus and commitment and positive outlook. There is a deduction of 0.5 points for each rail down, while refusals also attract penalties. A third refusal means elimination from the competition. Scores for each of five criteria (movement and type, rideability, scope, technique and general impression) are made by each of three judges and the scores combined into a single percentage. The combination with the highest percentage are the winners. Judges for the show are Nicole Bruggeman from South Australia, Australian Olympic jumping representative James Paterson-Robinson and John Macmillan from NSW.

In each age group, there are two qualifying rounds with the top 10 combinations being invited to compete in Saturday’s final. David Sheppard is the course designer for arena 1 for the show.

The first class scheduled this morning was the Trailrace Saddlery Australian Young Jumping Horse 4-year-old competition. There were only five combinations entered in this class for the youngest horses on show.

The first horse on course was Clasique Emerella, piloted by the current Australian Senior Champion Tom McDermott.  This combination went clear and impressed the judges with their movement, rideability and scope. McDermott and Clasique Emerella, a chestnut mare out of Emerald x Fiorella 104 by For Pleasure, and owned and bred by Jessica Spence, were declared the winners with a final score of 81.33%.

Third place went to Hayley Gears and Rockwell. Rockwell was sired by Rotspon with Fantasia the dam and is owned and bred by Leigh Church. This combination impressed the judges with their movement and type during a clear round, finishing on a score of 75.50%.

The five placings in this class were as follows: 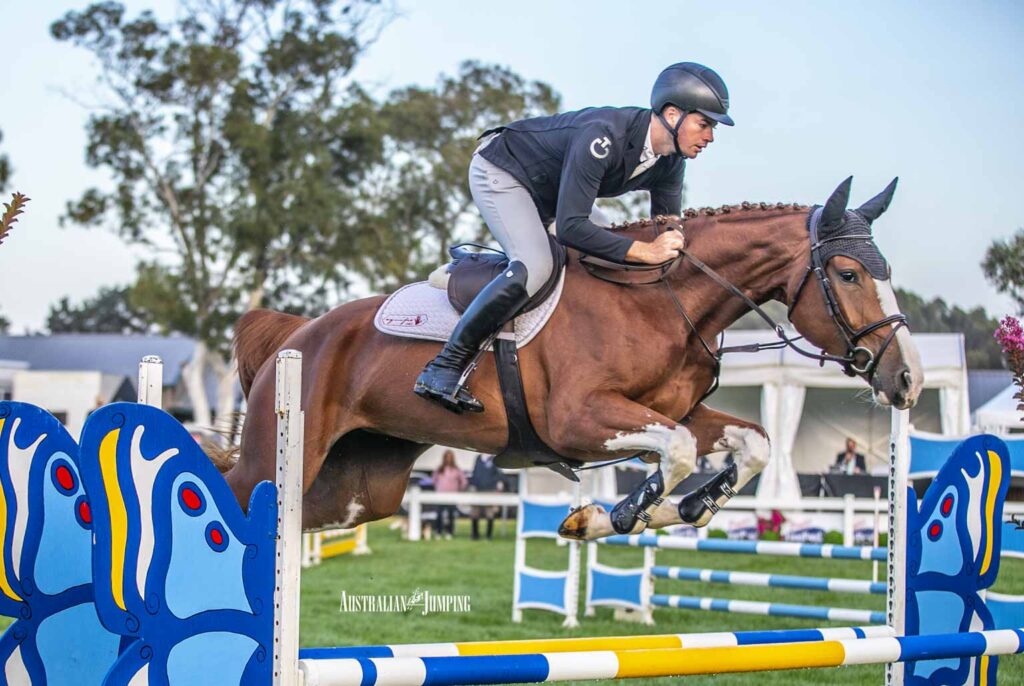 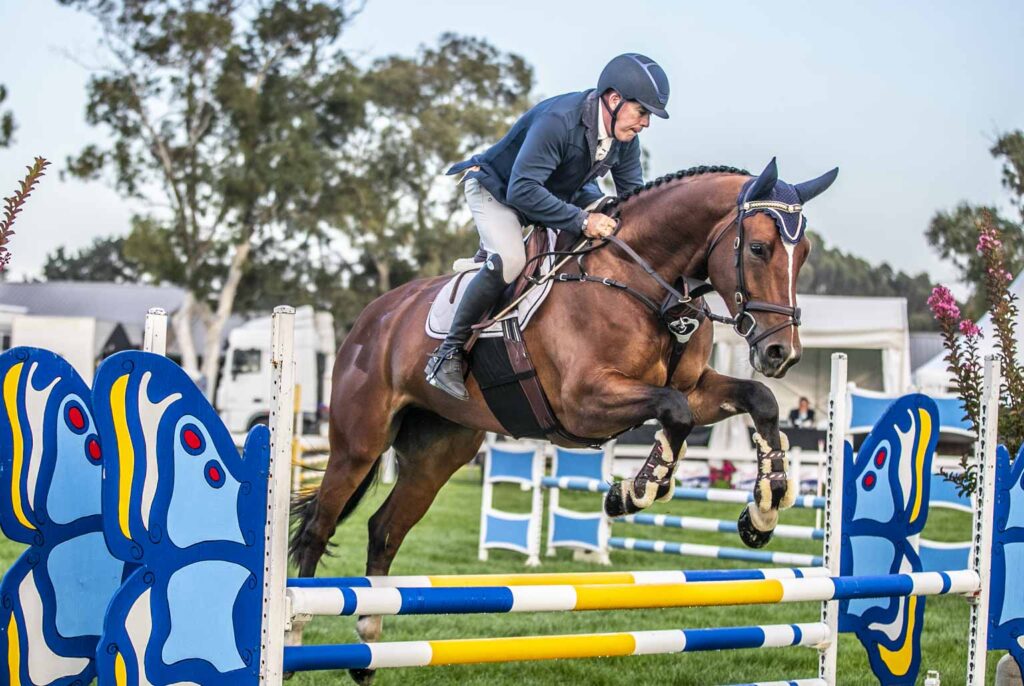 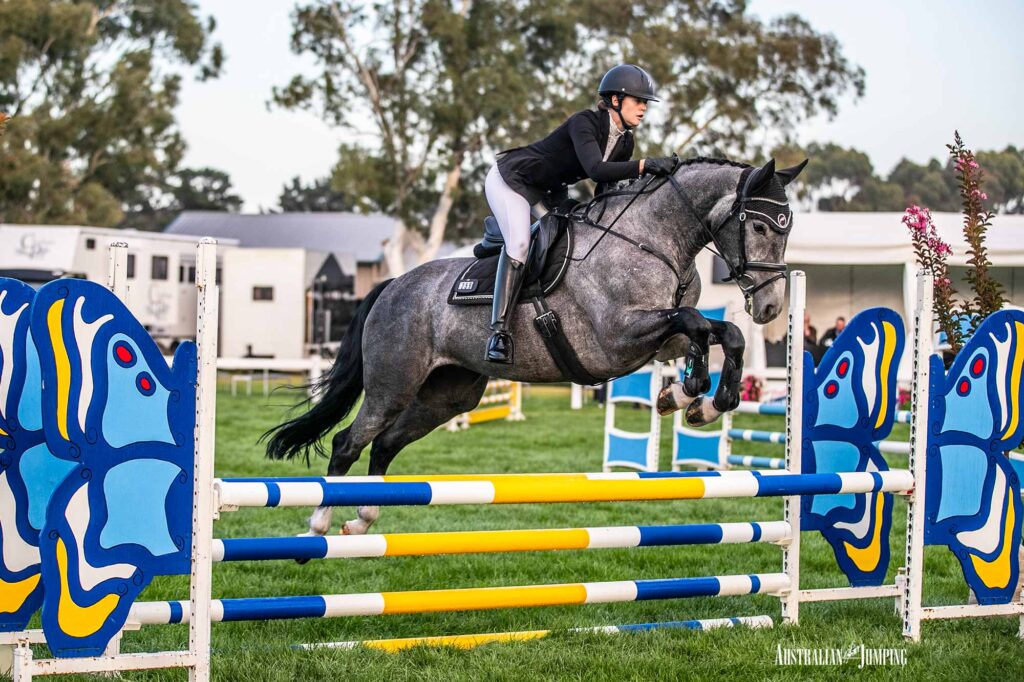 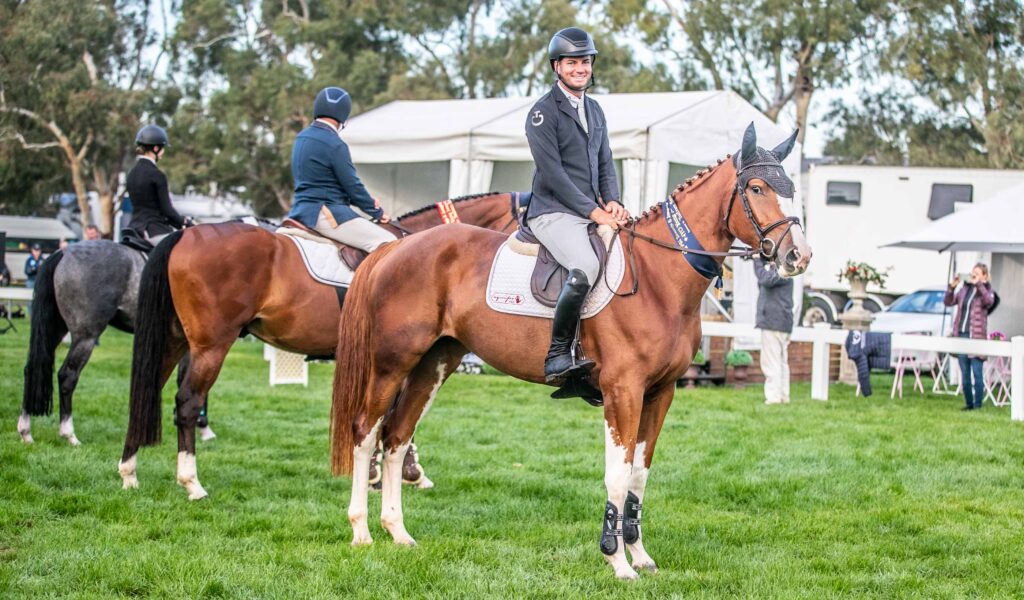 The next class was the first round of the Fleet Plant Hire Australian Young Jumping Horse – 5-year-olds competition where 30 combinations were entered.

The class was taken out in very impressive style by the Victorian based combination of Ally Lamb and Kiara DP, who scored highly on all criteria, after a clear round. Kiara DP is a grey mare which was sired by Kannan x Denison Park Cassisi (by Conquistador) and is also owned by Lamb. Their score of 85.33% was just ahead of the second placed combination of Billy Raymont and Tulara Dakchico (Dakar x Tulara Chico’s Girl by Chico’s Boy) who scored 84.33%. Raymont, who was entered in this class on three other horses is also the owner of the grey stallion Tulara Dakchico. This combination impressed the judges with their technique and general impression.

Third place, with a score of 84.67% went to the Victorian based combination of James Harvey and Yirrkala Celeste (Christian x Ukarla Exclusive by Escudo), who scored highly on scope and technique. 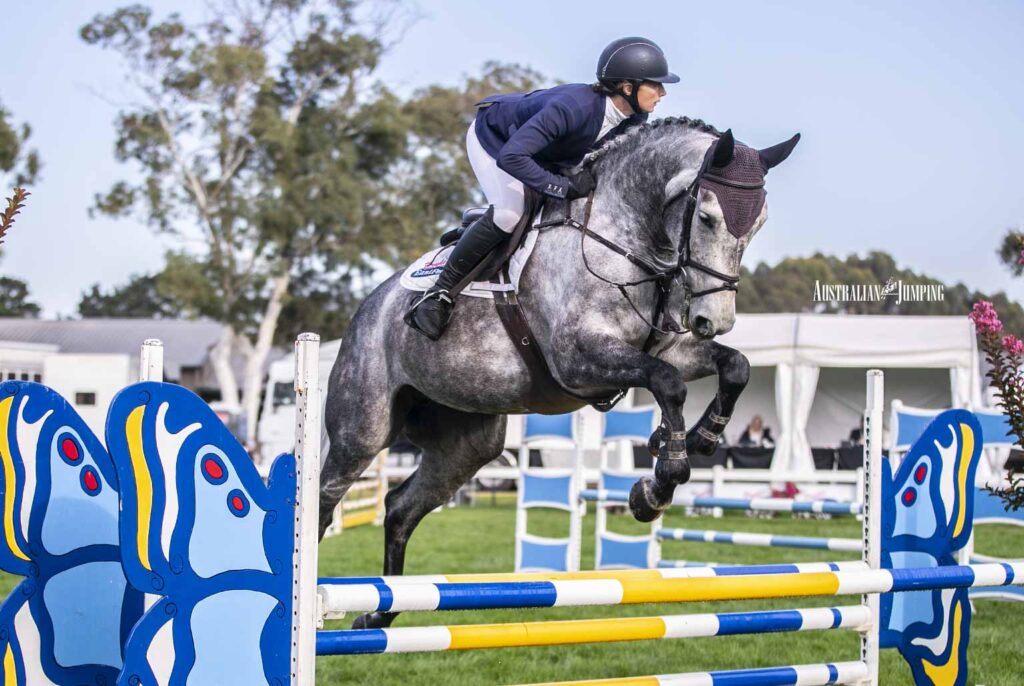 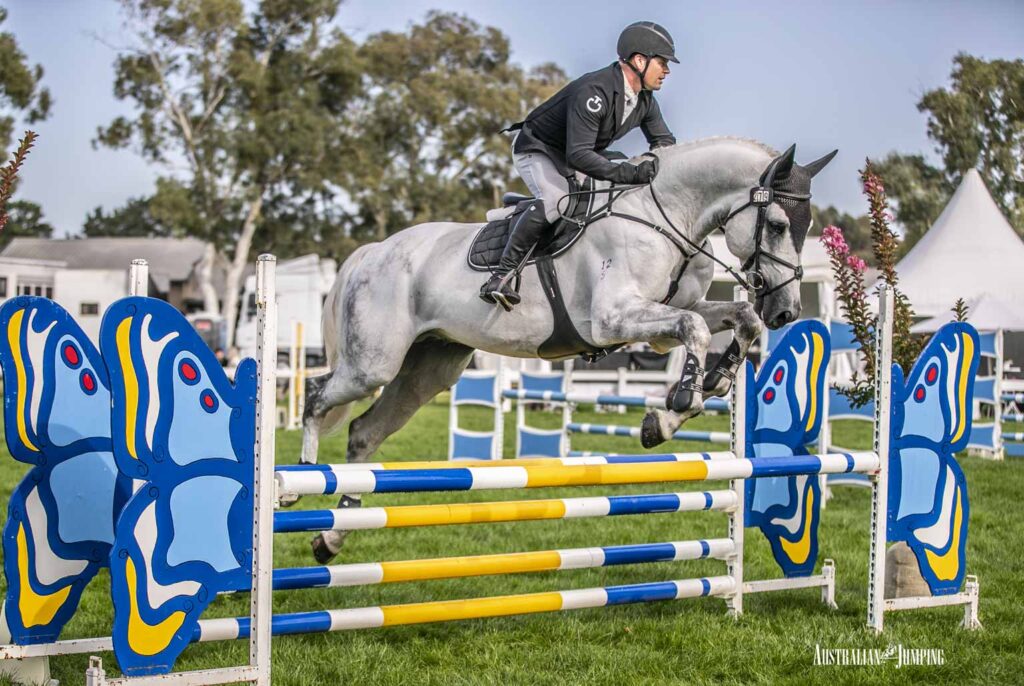 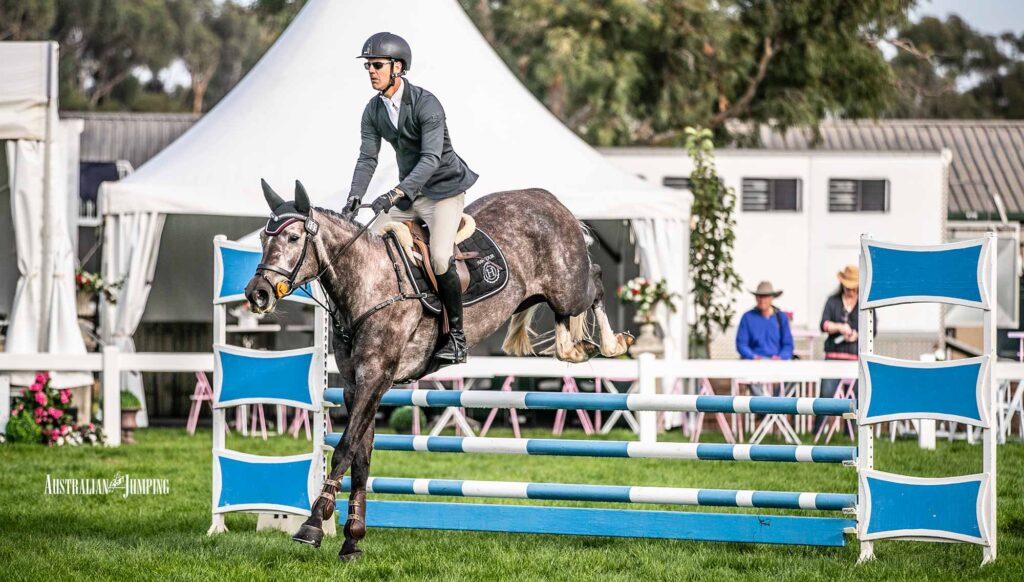 After a short break in proceedings the next class on the main arena was Round 1 of the Pryde’s Easifeeds Australian Young Jumping Horse 6-year-old competition. This class was won by Tom McDermott and Yalambi’s Kandy Ripple, which follows McDermott’s earlier success with Clasique Emerella in the 4-year-old competition this morning.

McDermott and Yalambi’s Kandy Ripple (Yalambi’s Fair Diamond VDL x Yalambi’s Gineya by Colman) was bred by Rory Hovell at Yalambi’s stud in WA. The brown warmblood mare, was awarded a final percentage of 86.17% after recording impressive scores in all categories.

Second place, with a score of 85.17% went to Andrew Lamb and Janory DP which is a black mare, (I’m Special De Muze x Fanory by Cardento), owned by Allyson Lamb. 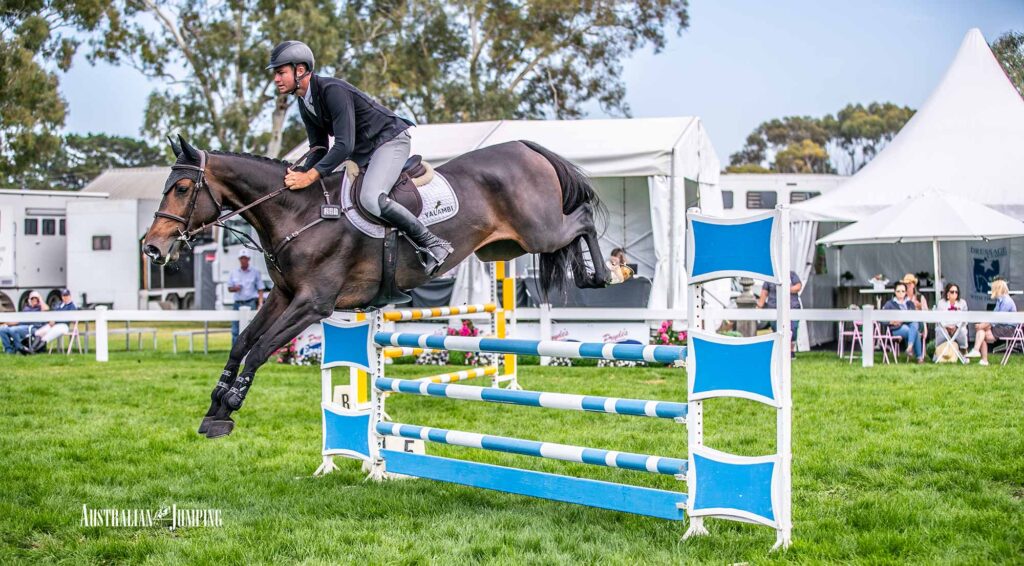 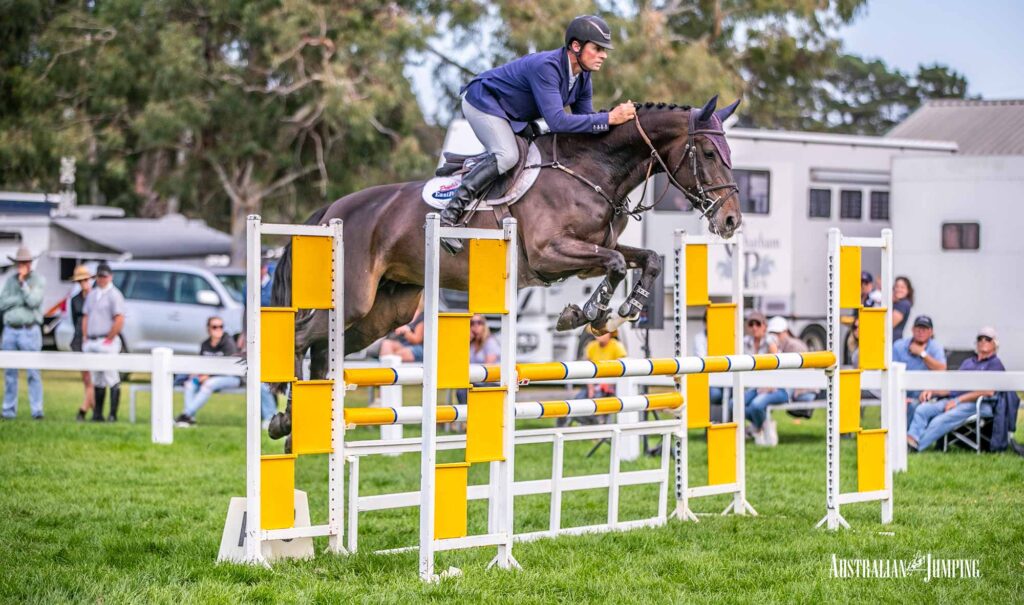 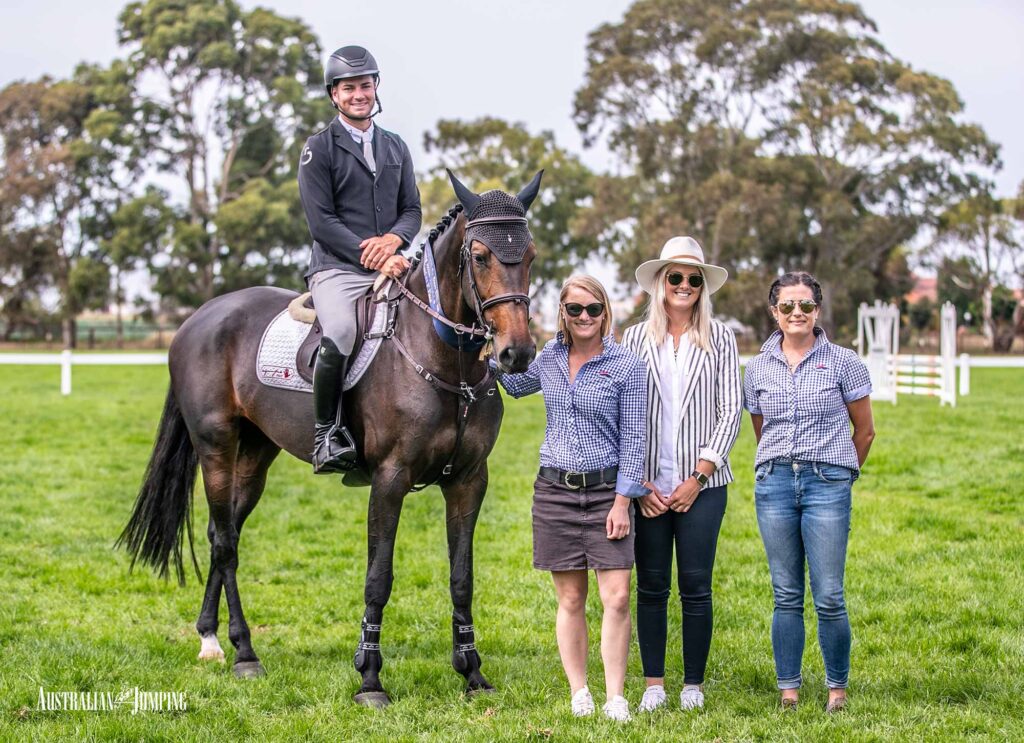 The fourth and final age class for today was first round of the Park Ridge Hay Australian Young Jumping Horse 7-year-old competition, which was won by Kate Hinschen and Yalambi’s Jadore

(Carpino Z x Fendi by Val D’Isere). The horse, which is owned by MT Australia Investments Pty Ltd and was bred by Yalambi Stud in WA is a bay warmblood mare. Hinschen and Yalambi’s Jadore were judged to have performed very well in all assessment criteria and completed a clear round to achieve a final score of 87.67%. The highest score of the day across all classes.

Second place went to Victorian Brook Dobbin and Velvet Cate (Kannan x Laetitia 56 by Lordanos). Owned by Adelyn Fallon and bred by Grandview Park, this bay Hanoverian mare achieved a final score of 82.50% with strong scores in all areas. 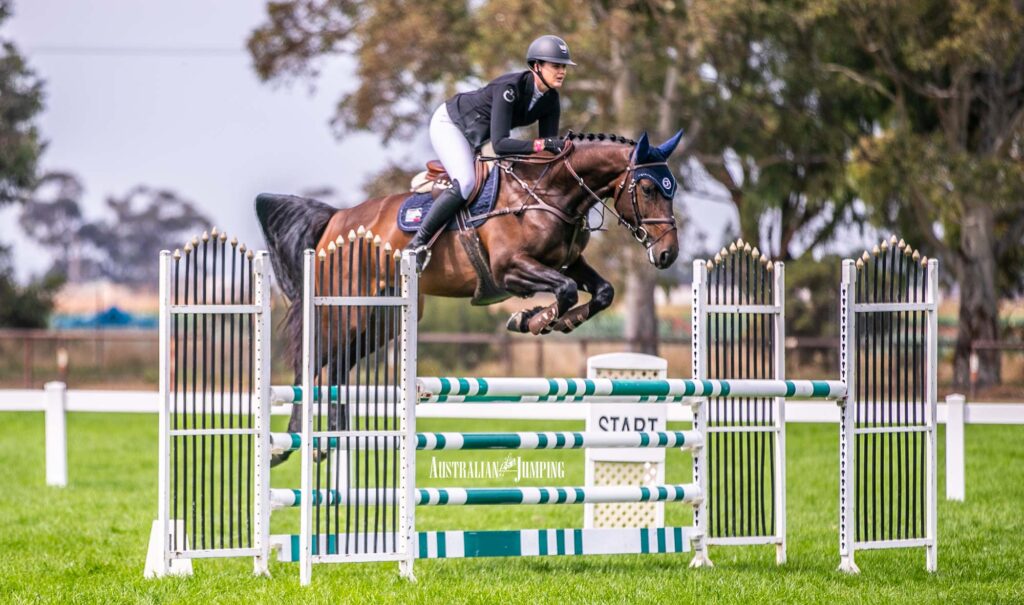 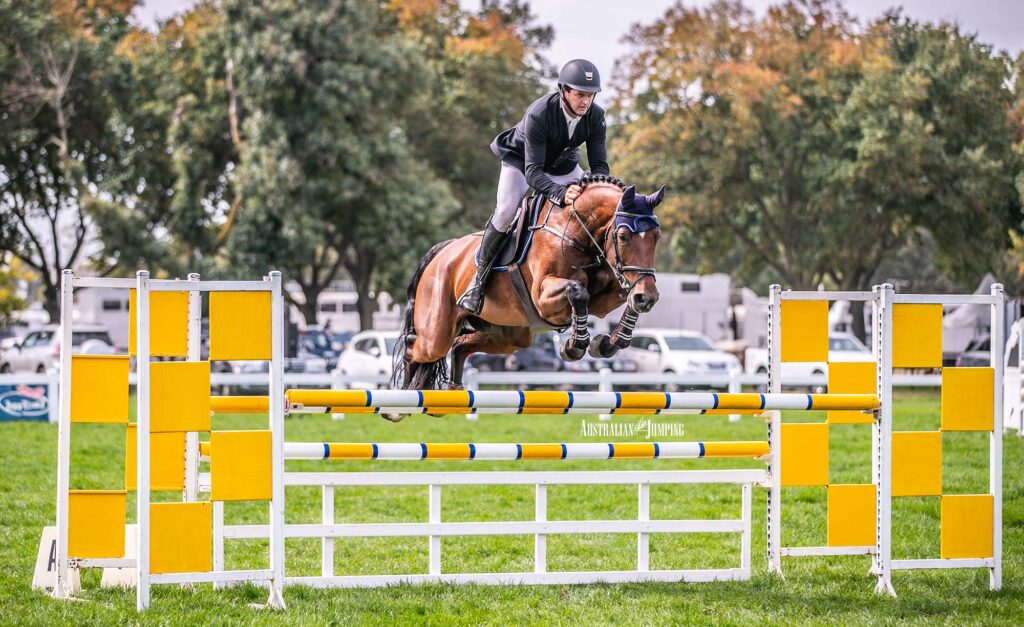 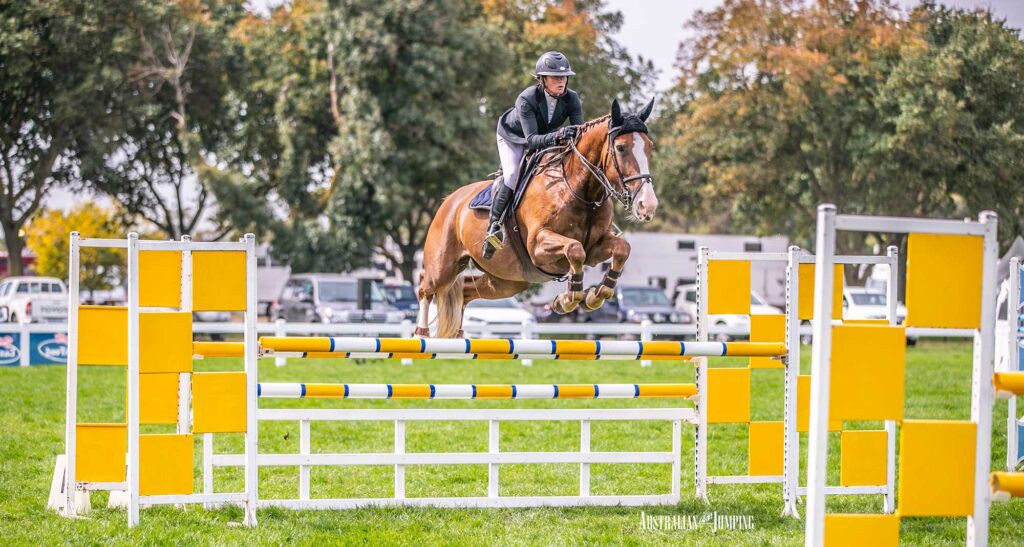 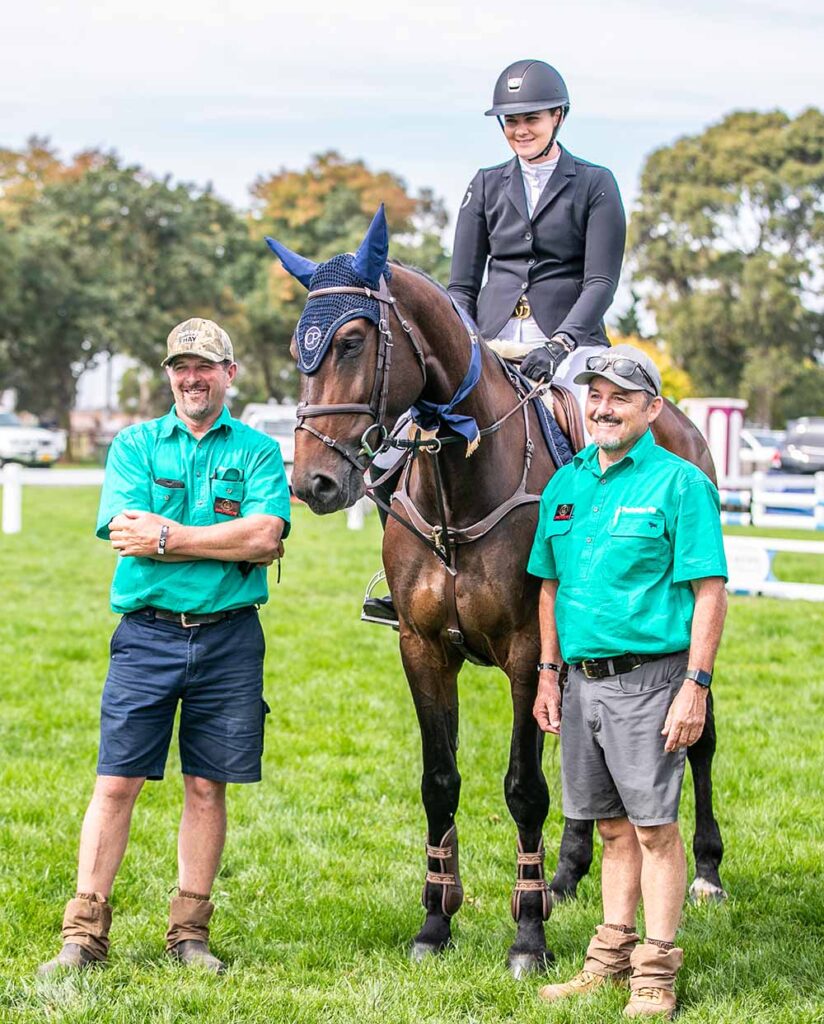 The final class on the main arena was the first round of the Antares Current Stars competition, which was conducted under normal jumping rules with no jump-off. With 42 combinations entered, the winner would almost certainly require a clear round and if there were more than one clear, then the fastest time would be declared the winner.

After only a few combinations had completed the course, Tom McDermott and his warmblood mare Elegance De La Charmille (Clinton x Kloe D’Archonfosse by Landwind) sizzled around the course, clear in just 63.83 seconds, almost 16 seconds less than the time allowed.

Over the next hour we watched as the next 36 combinations all had a go at knocking McDermott and Elegance De La Charmille out of the lead. Some were fast and some were clear. Some were even fast and clear. However, there was nobody who was clear and fast enough.

Finally, it was time for the last combination to enter the arena; no other than Tom McDermott, this time with the Kerry Langbecker owned Alpha Activity (Animate x Alice by Aggasi). We knew that McDermott had the win and the $1000 prizemoney in his pocket, it was just a matter of which horse would go down as the winner. 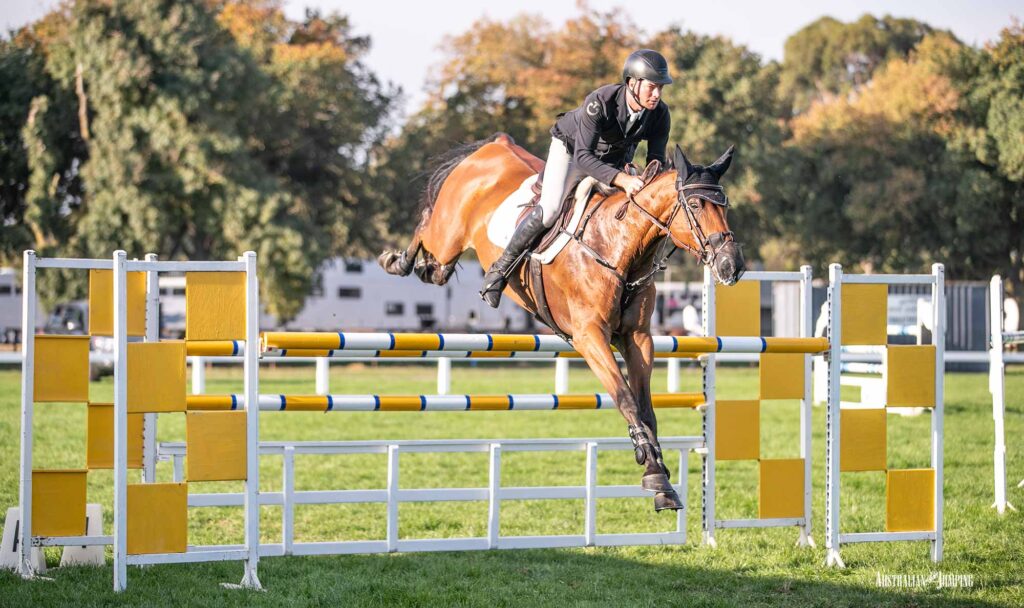 In a fantastic performance McDermott and Alpha Activity delighted the crowd by saving his best for last. If he had sizzled around the course on ‘Elegance’, then he fairly rocketed around it on ‘Alpha’ in just 60.93, almost three seconds faster than the leading time.

McDermott and Elegance De La Charmille were relegated to second place. Next best of the rest and in third place was Australian WEG representative Billy Raymont and YPH Capulet (sired by Carpino and owned by Susan Tucker), in 64.48 seconds, just 0.65 seconds off the win. 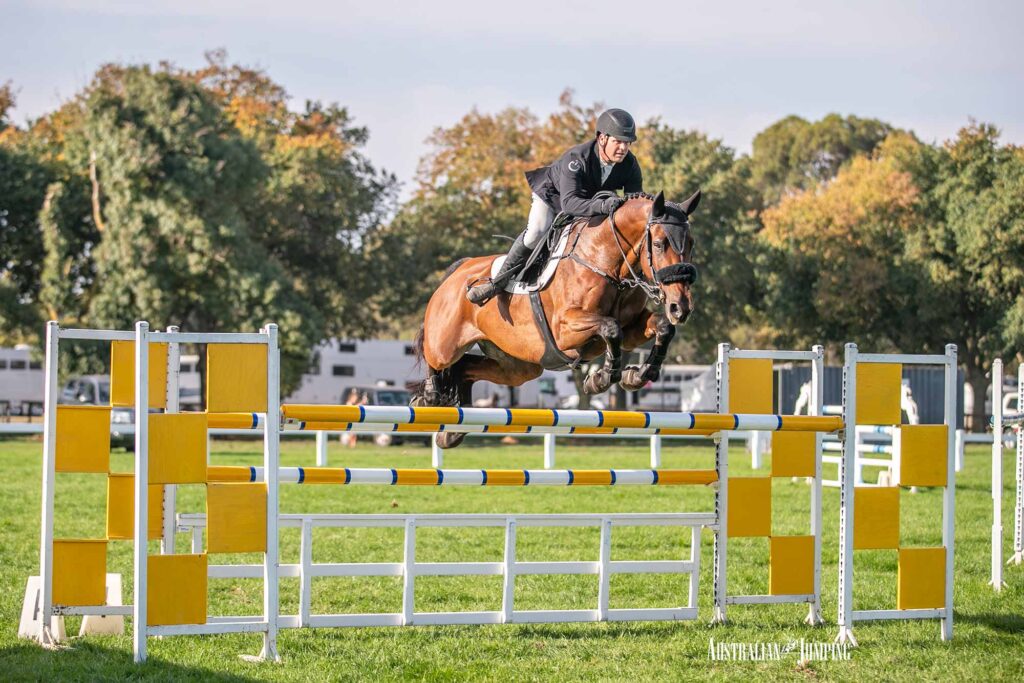 The experienced Victorian, Russell Johnstone and the McCann family-owned black gelding Dondersteen (Vaillant x Odonja by Ferro) was relegated to fourth (in 65.60 seconds) after holding down third, until McDermott worked his “last in the draw” magic. 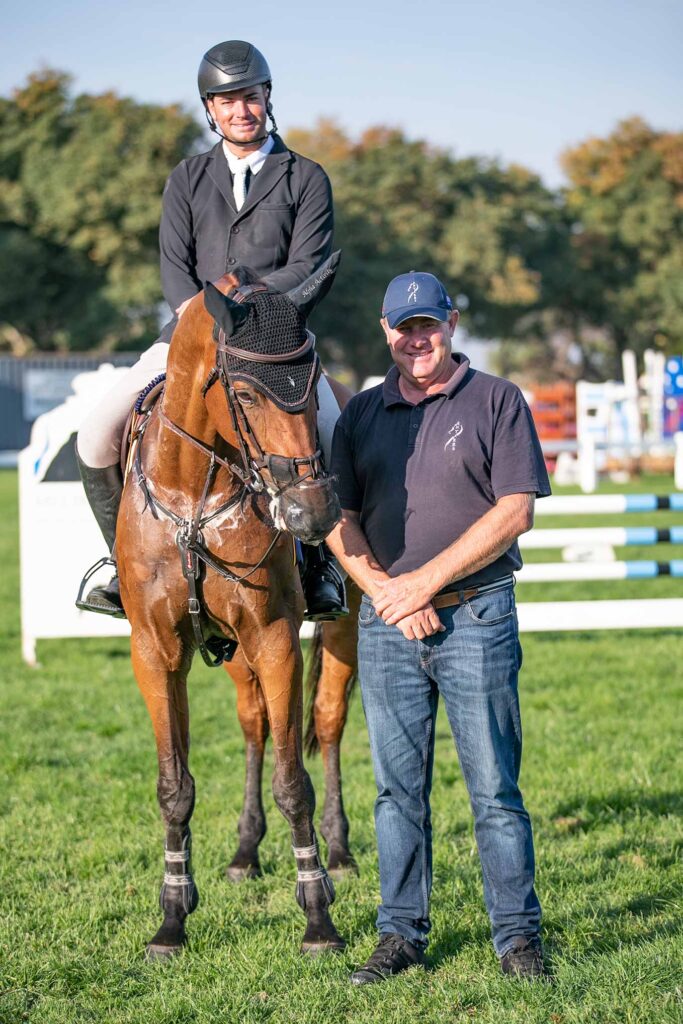 On Arena 2, three classes were held, each being the first round of a series.

The first six placings in each class were as follows:
Poppy Tour – Round 1 – 1.10m

We congratulate all the winners and placegetters and look forward to Round 2 competition for all these series tomorrow.