All set for finals day at Werribee tomorrow 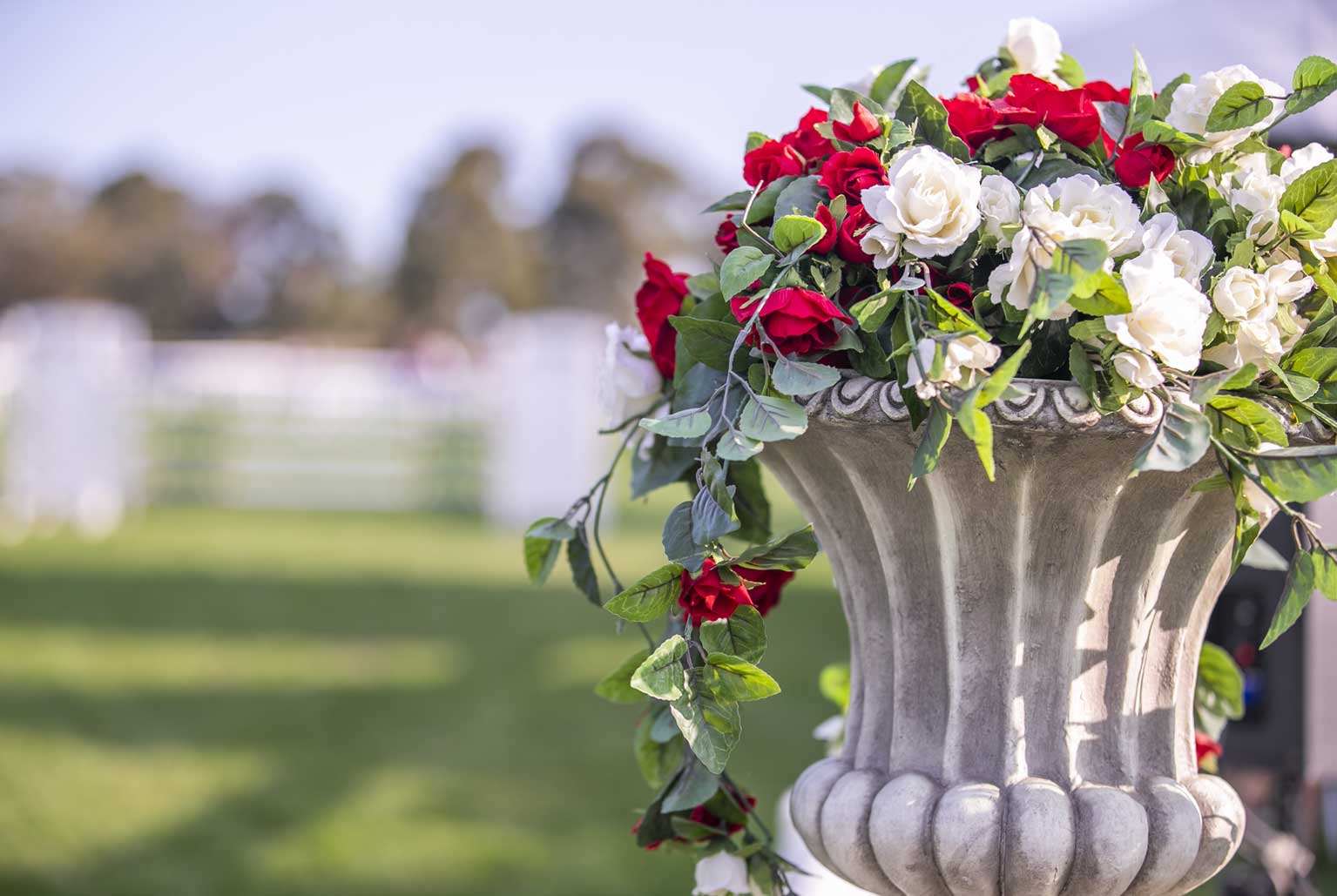 A fine clear morning greeted riders, horses and spectators on Day 2 of the PSI Dressage and Jumping with the Stars extravaganza, being held at the Werribee Park National Equestrian Centre. Today saw Round 2 competitions in all Jumping Series and we were not disappointed with the quality of the jumping as competitors took it up a notch from yesterday (click HERE for a full report of Day 1 action) all striving for places in tomorrow’s finals. No doubt the highlight of the weekend will be tomorrow’s first round of the 2021 Australian Jumping World Cup Series.

As we saw yesterday, the first part of the program was for the young horses first which were judged by Nicole Bruggeman from South Australia, Australian Olympic jumping representative James Paterson-Robinson and John Macmillan from NSW.

The first class scheduled this morning was Round 2 of the Trailrace Saddlery Australian Young Jumping Horse 4-year-old competition. There were only five combinations entered in this class for the youngest horses on show.

The class was taken out by Stephen Dingwall and Nisha, a Warmblood mare that he owns, with a final score of 76.83%. 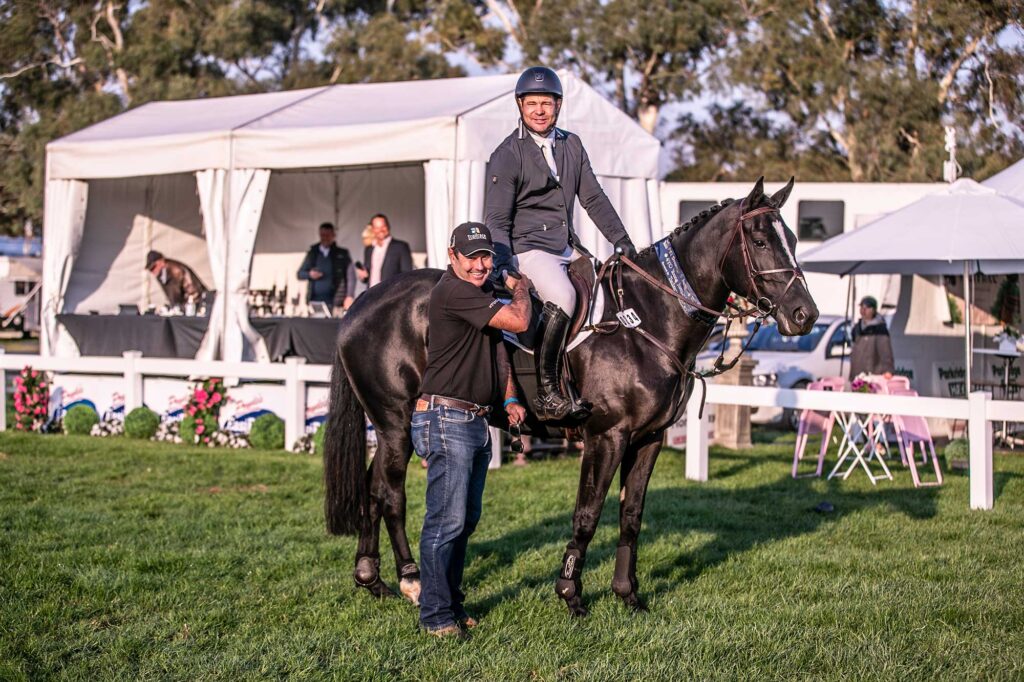 There was a tie for second place. Finishing equal with a score of 76.33% were Adelyn Fallon and Carousel (Contendro 1 x Laetitia 56 by Lordanos) and yesterday’s class winner, Tom McDermott and Clasique Emerella (Emerald Van’t Ruytershof x Fiorella 104 by Full Speed).

The judges all commented about how just the experience of competing yesterday in Round 1, saw all the competitors perform better today, which should be expected of these jumping babies. With today’s outing under their belts, we can look forward to further improvement in tomorrow’s final.

The five placings in this class were as follows:

The next class was the second round of the Fleet Plant Hire Australian Young Jumping Horse 5-year-olds competition where 30 combinations were entered.

Going one better than their second place in Round 1 yesterday was Billy Raymont and a horse he owns, Tulara Dakchico (Dakar x Tulara Chico’s Girl by Chico’s Boy) with a score of 86.33%. 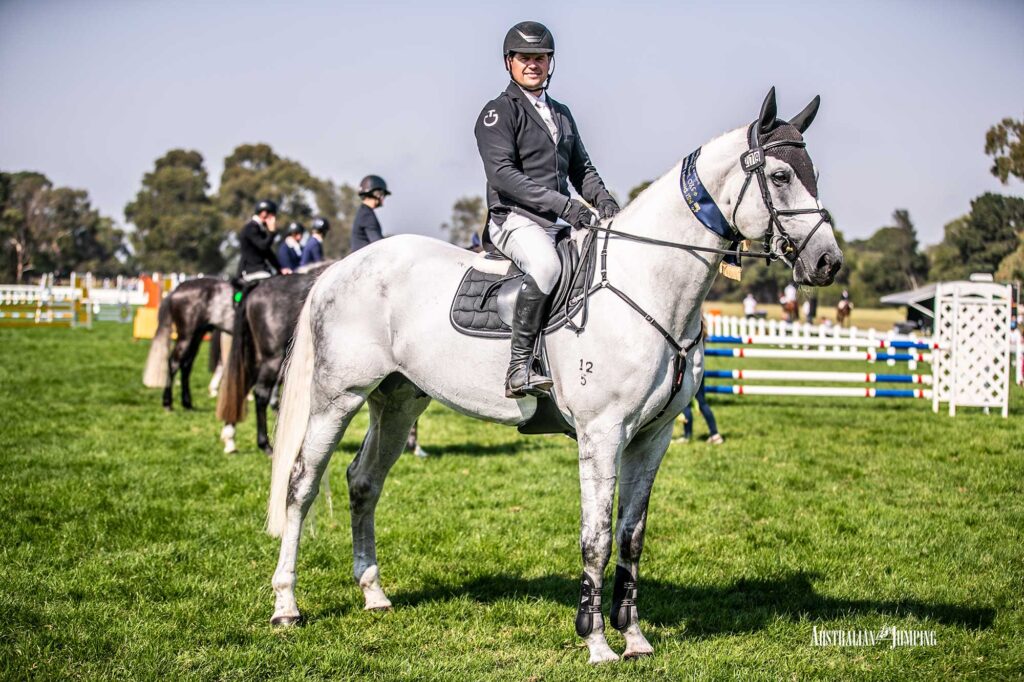 Second place went to Frida Lindgren and the Warmblood mare Bonita (Balou De Rouet x Alondra) with a score of 83.17%.

Rounding out the podium in third, on a score of 80.83%, was South Australian visitor Conor Reed and ES Casello (Christian x Dingelinge by Darco) a grey stallion owned by his father Clive Reed.

Yesterday’s round 1 winner Allyson Lamb and Kiara DP, proved to be consistent performers taking an equal share of fourth place in this second round and should be well placed going into tomorrow’s final. 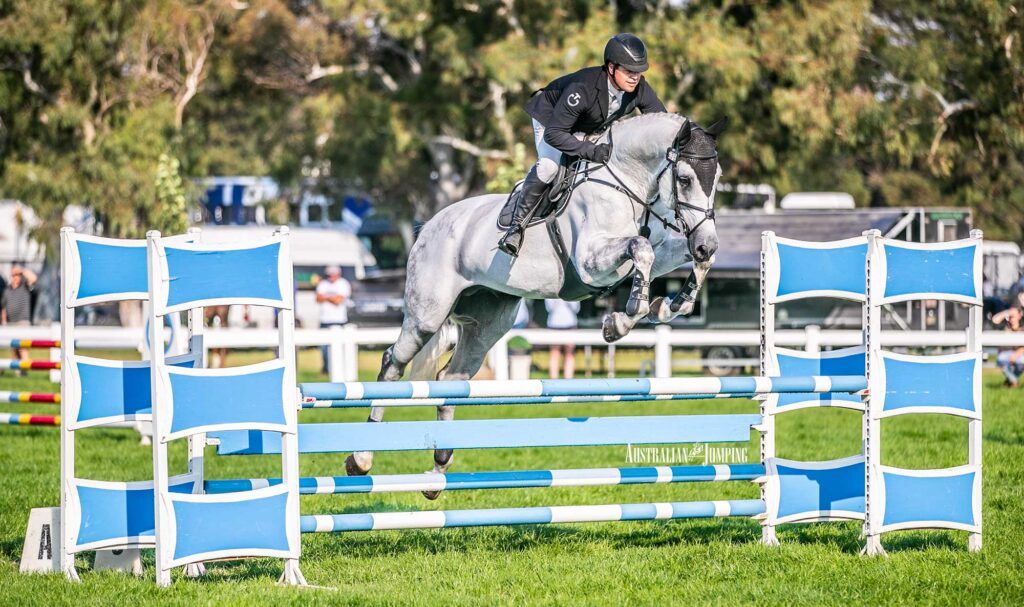 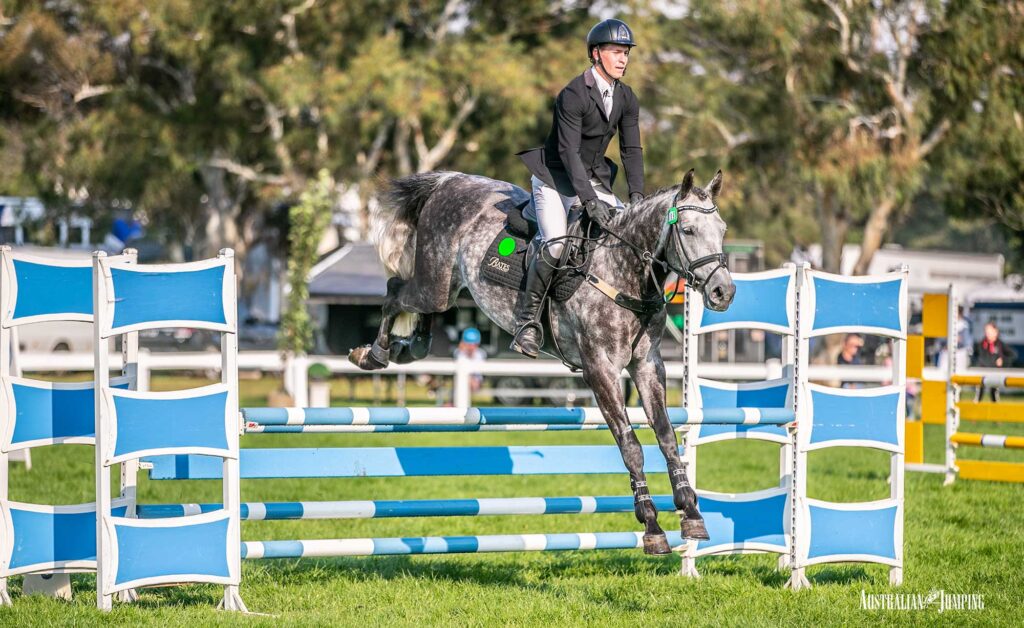 After a short break in proceedings the next class on the main arena was Round 2 of the Pryde’s EasiFeeds Australian Young Jumping Horse 6-year-old competition.

As they did yesterday in the first round, Tom McDermott and Yalambi’s Kandy Ripple (Yalambi’s Fair Diamond VDL x Yalambi’s Gineya by Colman) took the win, however, unlike yesterday when he stood atop the podium alone, today he had to share it. This combination scored a total of 86.50% today, which was an identical score to that achieved by Billy Raymont and the Caroline Price owned Cera Cadbury Z (Christian x Cera Calista by Clearway), who improved on their third placing yesterday.

Tomorrow’s final looks like it will be compulsive viewing as both McDermott and Raymont will go into it on near equal standings and both aboard a pair of wonderfully promising 6-year-olds. 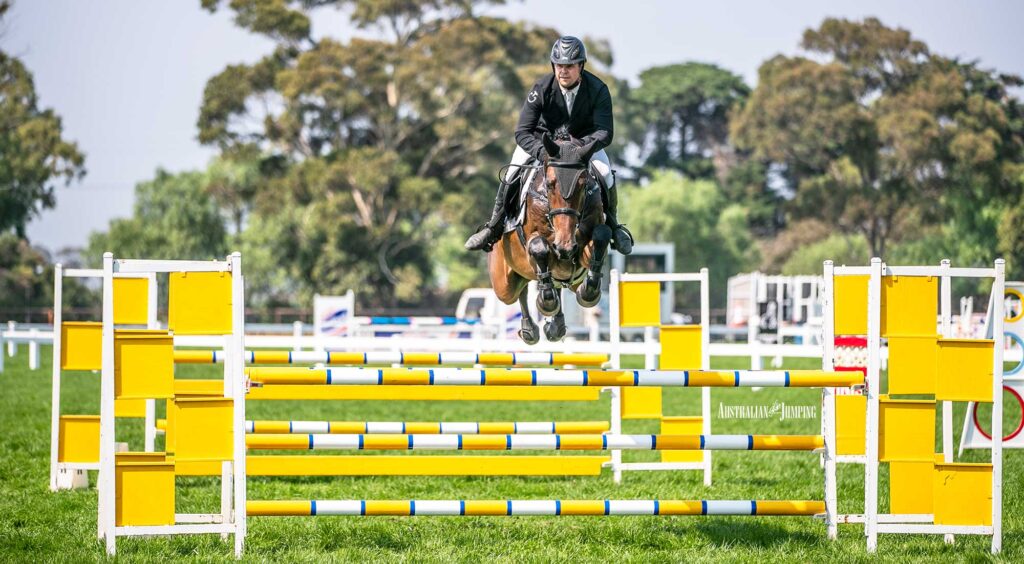 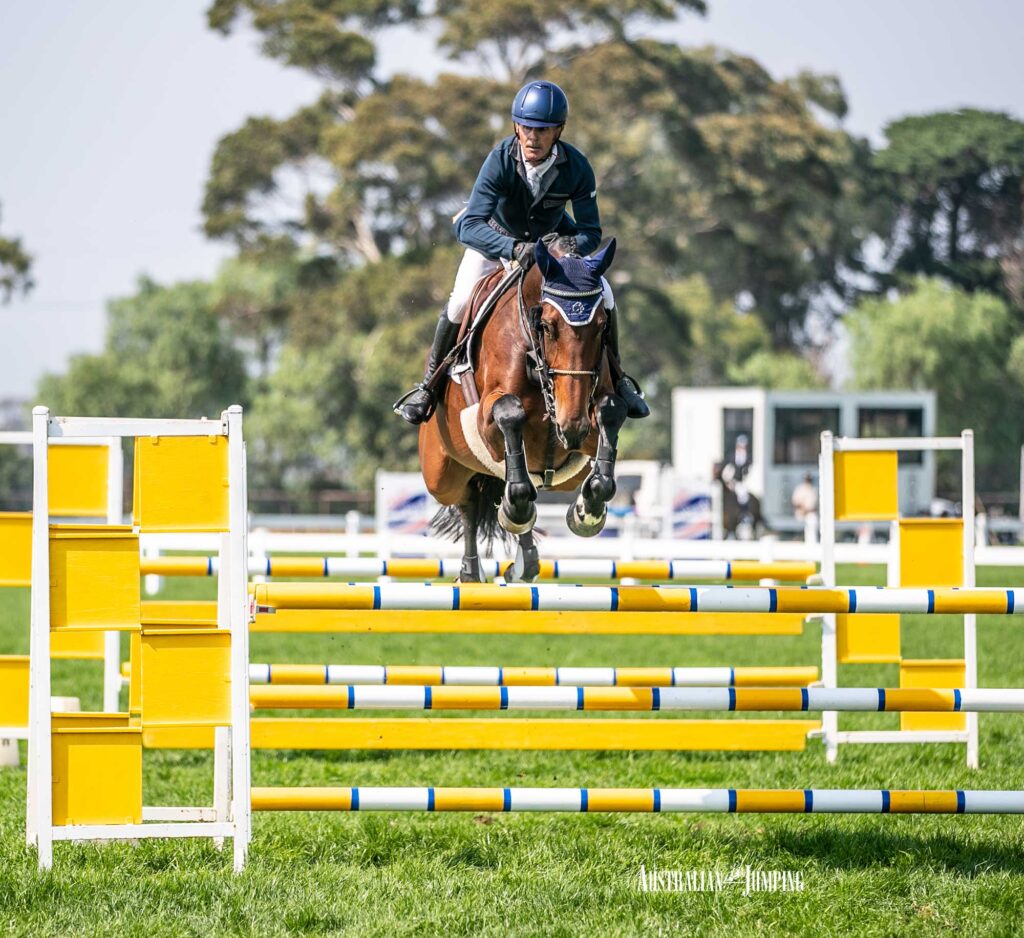 The next class on the main arena was round 2 of the Parkridge Hay Australian Young Jumping Horse 7-year-old competition, which was won by Kate Hinschen and the MT Australia Investments Pty Ltd owned bay mare Yalambi’s Jadore (Carpino Z x Fendi by Val D’Isere).

In a superb performance with a score of 88.67%, Hinschen and Yalambi’s Jadore, not only replicated their class win from yesterday’s first round, but they eclipsed their score from yesterday, which until this round was the highest recorded during the Young Jumping horse classes.

It will be interesting to see how the final of this competition pans out tomorrow and if Hinschen and Yalambi’s Jadore can make it a series clean sweep. 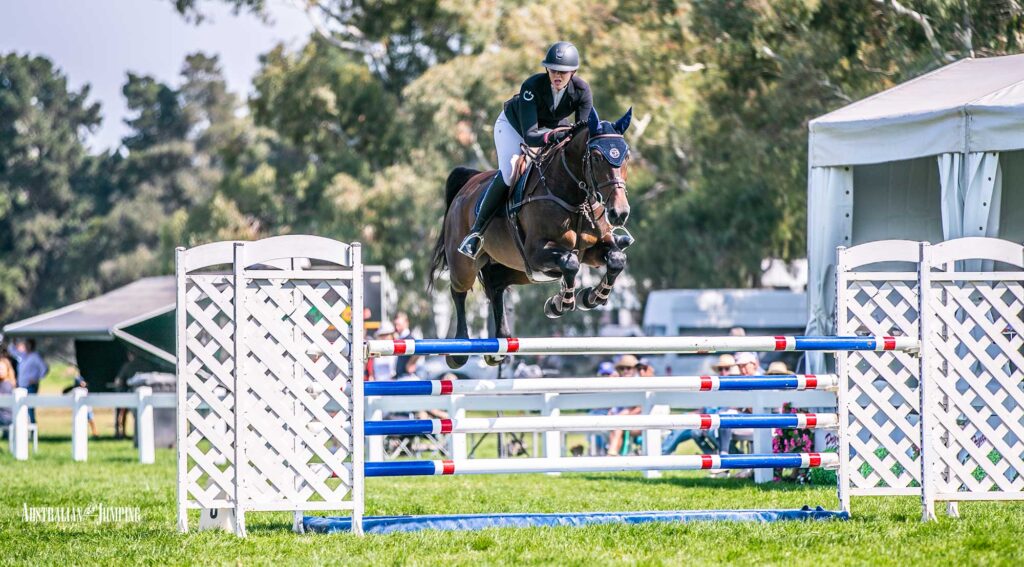 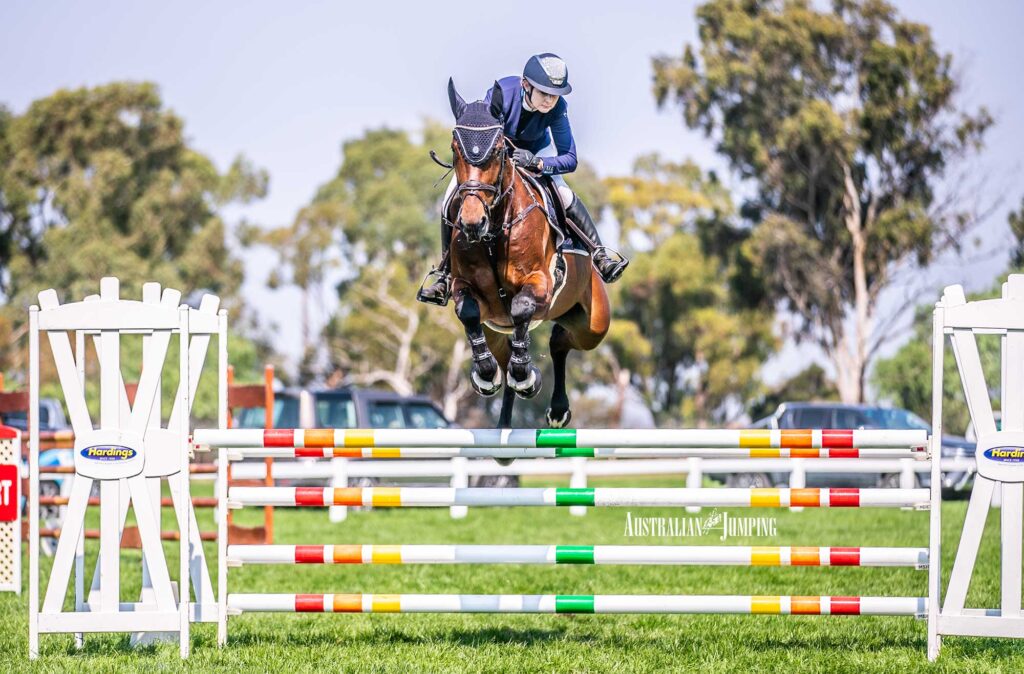 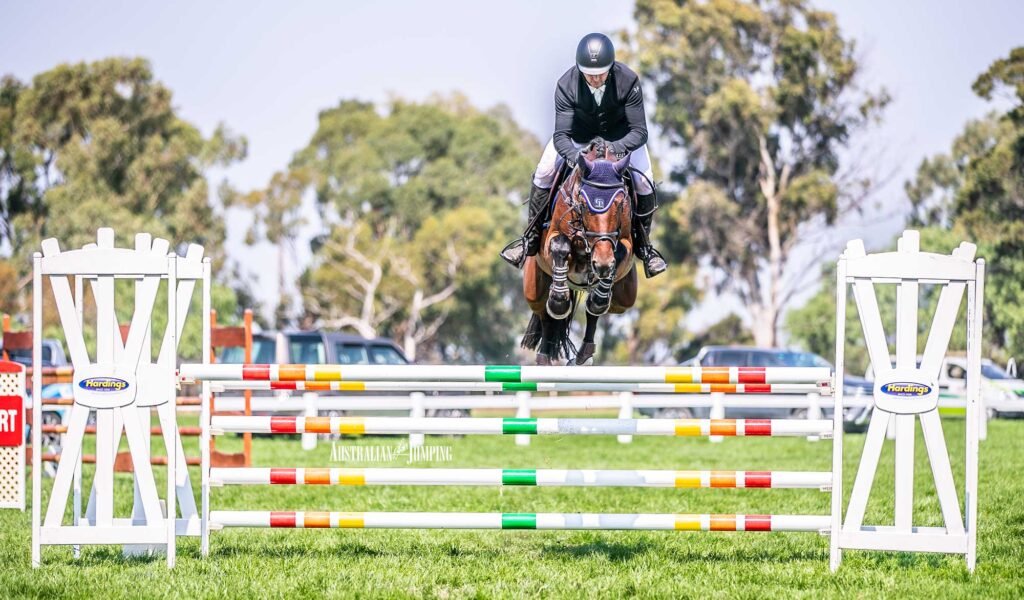 The final class in the main arena this afternoon was the second round of the Antares Current Stars competition. Thirty-eight combinations ventured onto the course and there were 15 clear rounds, the fastest of which was achieved by yesterday’s first round winning combination of Tom McDermott and Alpha Activity (Animate x Alice by Aggasi).

Stephen Dingwall and Cavalier Du Rouet (Balou Du Rouet x Eleganz by unknown) and Gabrielle Chugg and Cera Cassiago (Cassini 1 x Lambada by Carthago Z), although invited back for the jump-off declined the invitation, leaving us with 12 combinations to battle it out for the $1,000 first prize

First out in the jump-off was Tom McDermott and his wonderful little mare, Alpha Activity. They recorded a clear round in a flying 39.51 seconds to set a real challenge for the rest of the field.

First to try was Kate Hinschen and Oaks Ventriliquist (Vivant x Renata Ego Z by Rex Z), however, their clear round was almost 3.5 seconds slower than the leader. Next, we saw Russell Johnstone and Dondersteen (Vaillant x Odonja by Ferro) who competed with urgency. Their clear time of 42.35 was only good enough to place them into second for the time being.

Sydney Olympic Games Eventing representative Amanda Ross was next, riding RLE Poynstown Will (Ars Vivendi x Not Amused by Limmerick), however a rail at the second last put them out of contention.

The Victorian combination of Andrew Lamb and Denison Park Spartava (Spartacus x Covada by Cornet) were next to try and beat McDermott’s performance, however, a couple of rails were taken despite recording a very competitive time. Another Victorian pair followed, namely Paul Brent and Kablesse Kavita (Zirocco Blue VDL x Uvita-Rose H by Heartbreaker), however they were not able to record a clear round.

The seventh combination in the jump-off were Tom McDermott and Cachassini II (Cachas x Varese by Cassini), trying to beat himself. Although they went clear, their time of 43.21 seconds, placed them in fourth for the time-being. 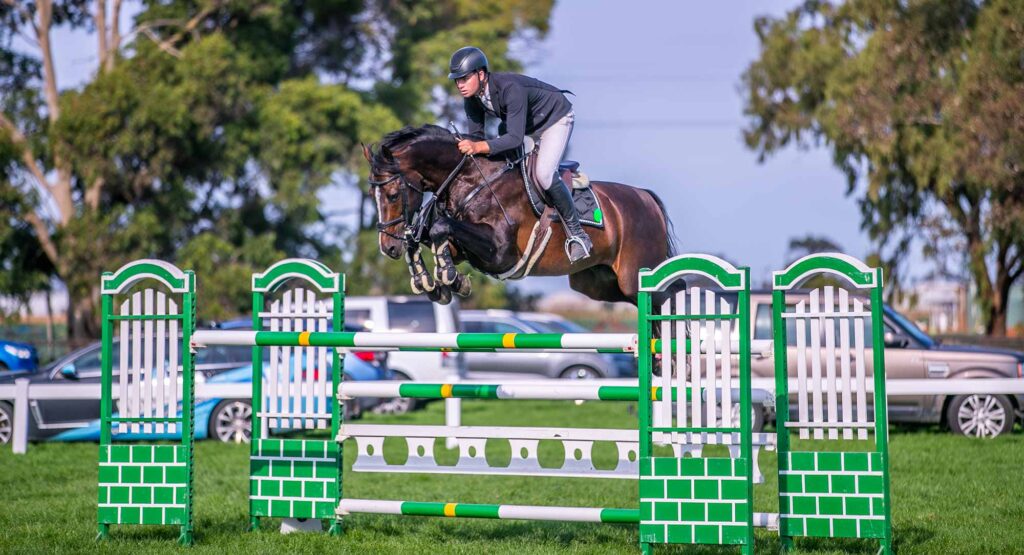 Having her second ride in the jump-off, Kate Hinschen and Barrichello (Madison x Vodiena by Pythagoras) were next. Despite a quick time, a rail meant that her highest place was going to be due to her previous double clear effort with Oaks Ventriliquist.

James Arkins and Aveden Indigo were next, however, despite a very fast time (38.08 seconds) which was the fastest time so far, a single rail put them out of business.

Local legend Russell Johnstone and Daprice (Quaprice x Larusa by Acord II) were next in the draw. They gave it a real shake, until a relatively early rail put them out of contention.

McDermott had seen nine combinations try to knock them out of the lead and with only two remaining, the excitement and anticipation was palpable.

The second last combination on course was the young South Australian, Conor Reed and Leopoldo MVNZ (Clinton 1 x Sunday by Carolus), but soon the rattle of a rail falling meant that the fast double clear required to challenge for the win was going to elude them.

The last combination on course were Sam Conway and Kendalee Centaurus SHL (Centus x Kendalee Bridgit by unknown), however, their winning chance evaporated when they knocked down a rail, leaving McDermott and Alpha Activity with the victory.

It was a scintillating win for this pair and following their convincing win yesterday, should set them up for a very competitive performance in tomorrow’s World Cup class. 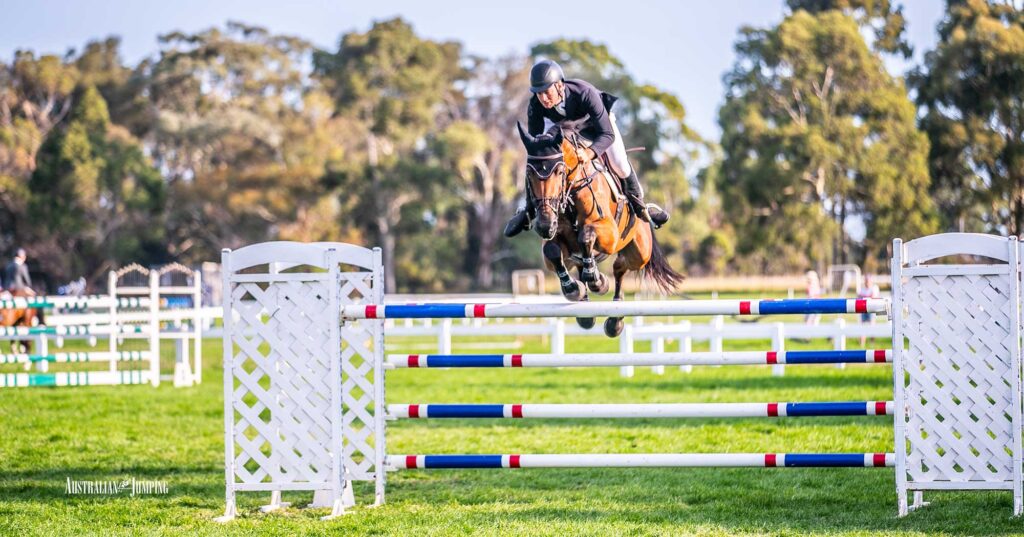 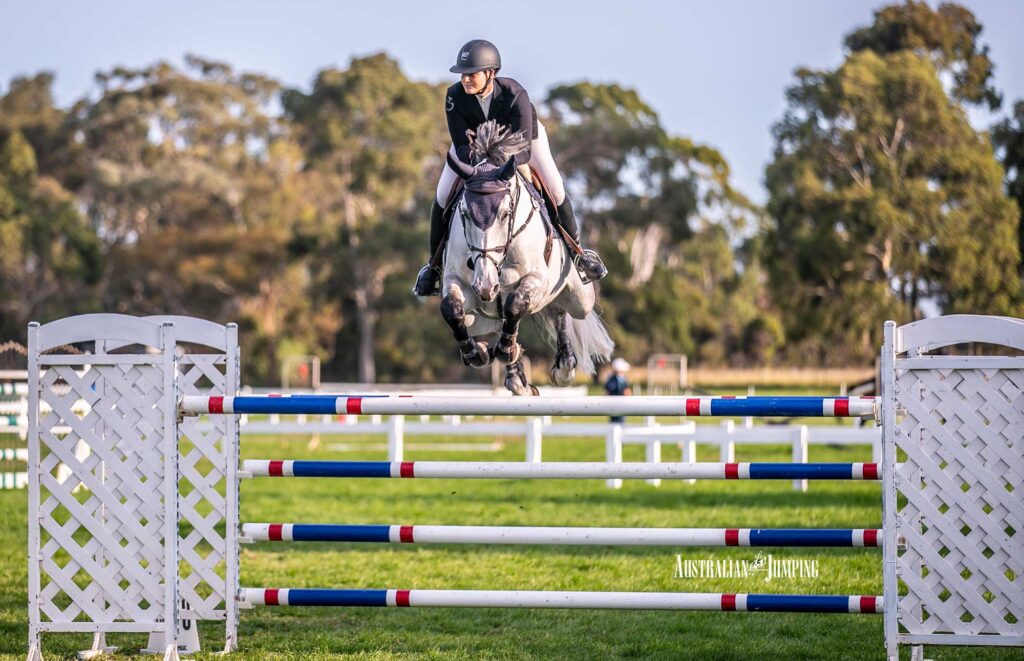 On Arena 2, three classes were held, each being the second round of a series, with finals scheduled for tomorrow

The first six placings in each class were as follows:Poppy Tour – Round 2 – 1.10m

We congratulate all the winners and placegetters and look forward to finals for all of these Series tomorrow as well as the World Cup class.