Jump Off Episode 6 – Behind the Scenes and Highlights 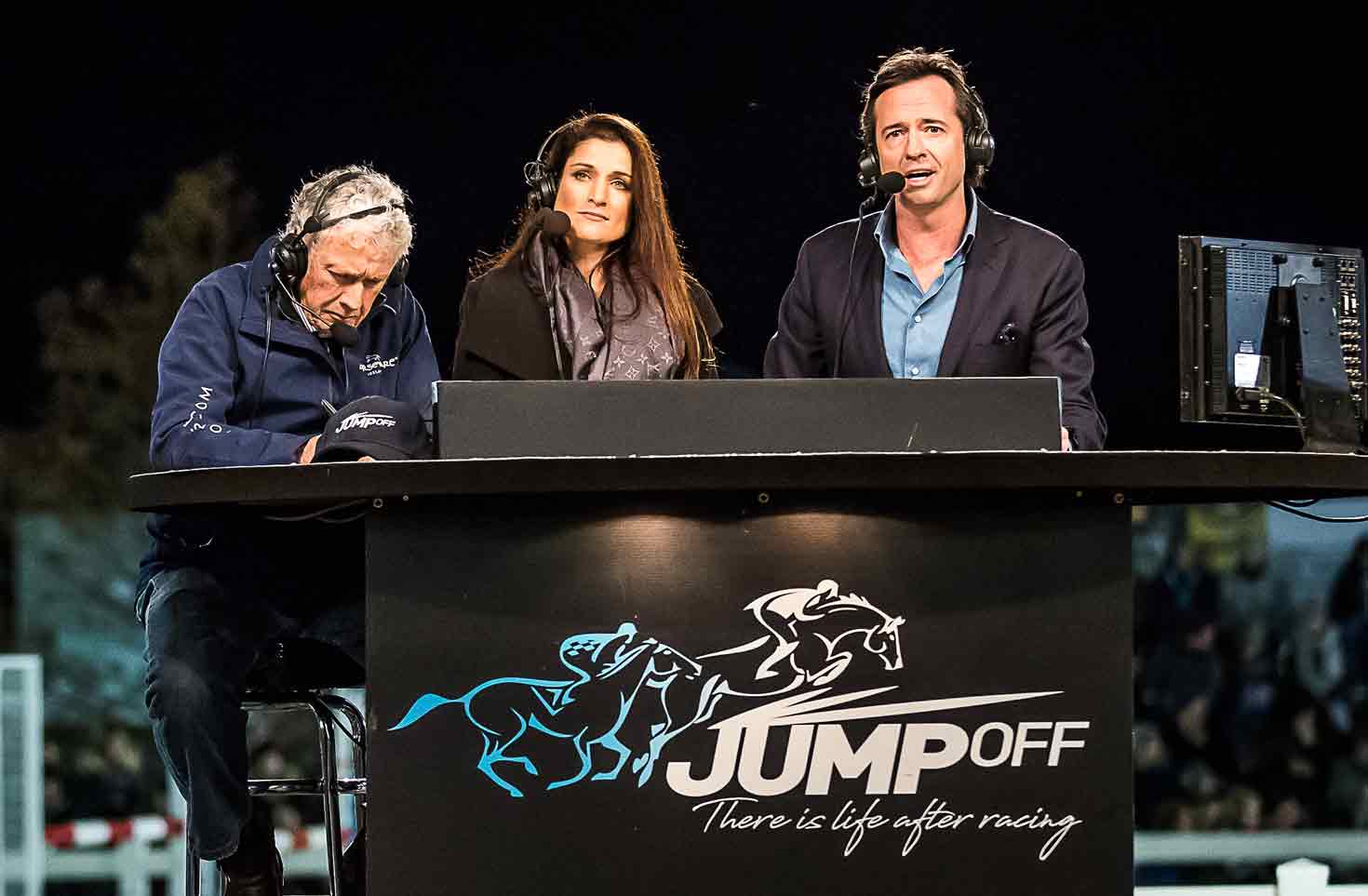 What a journey it has been so far for our riders and these lovely horses. Last week, on Episode Five of Jump Off, the riders took their top two selections up to the AQUIS Champions Tour at Elysian Fields, Canungra, Queensland as a prelude to the Jump Off Grand Final next week.

After introducing their horses to competition around some smaller courses, the combinations were ready for their exclusive class in the main arena. With $5,000 prize money on offer for this main competition, the competition starts to heat up. This is a whole new experience for these thoroughbreds. The jumps were not high, but the challenge was adapting to the full show atmosphere; other horses, crowds and loud speakers just to name a few of the elements that make riding at a show so much more challenging than at home.

Just to recap on the main arena results from last week’s episode:

– David Cameron and Riotman were first out and went clear in 87.03 seconds.
– Vicki Roycroft and Stryker Rose were next. They were faster (78.55) but collected 4 faults along the way.
– Russell Johnstone rode Mr O’Postrophe next. They went clear in 85.97 seconds to take the lead.
– Johnny English, ridden by Peter McMahon were next up. They finished in 85.00 seconds, but unfortunately, with one rail down, sat in fourth place at the end of last week’s episode.

In Episode 6 we saw the remaining combinations tackle the course – with varying degrees of success.

– Jamie Winning (Jamie Kermond’s wife) is first out with Raposo (Roland). They have a great round and Roland takes it all in his stride (excuse the pun), with just a single rail down at the last fence, finishing on 4 faults in a time of 84.70 seconds.

– Dave Cameron and Neutronic (Sparrow) are next out, with a lovely relaxed round by Sparrow, finishing on 4 faults in a time of 90.36.

– Vicki Roycroft and Inner Circle also put in a great performance in the main arena with 4 faults in a time of 77.99.  Inner Circle coped very well and didn’t react at all to the atmosphere.

– Peter McMahon and Gotta Take Care (Woody) have a great clear round in a time of 80.02 seconds.

– The penultimate pair of Russell Johnstone and Bolivar (Benny) take one rail in 89.15 seconds.

– The final combination in Round 1, Jamie Kermond and Peaceful Easy Feelin (Easy), have a great clear round in 83.50 seconds securing them a place in the jump off.

Amazingly, each team ends up with one horse in the jump off:

Dave Cameron and Riotman (Sunny) have a great round with one rail in 40.00 seconds. The next combination out, Russell Johnstone and Mr O’Postrophe, were nice and fast (38.59 seconds), but had 3 rails down – disappointing after such a great first round. Vicki Roycroft and Inner Circle take just one rail in 41.12 seconds to temporarily take second place. Peter McMahon and Gotta Take Care (Woody) go clear in 38.02 seconds with a super round to take the lead. Knowing what they need to do to win, it is up to Jamie Kermond and Peaceful Easy Feelin (Easy) to go clear in under 80.02 seconds, but with two rails down they didn’t manage to take the win off Peter McMahon and Gotta Take Care (Woody).

So that’s a wrap for the wonderful AQUIS Champions Tour at Elysian Fields and what a great learning experience that has been for these off the track thoroughbreds.

Five months after selecting their horses, the teams now head to Boneo Park for the main Jump Off competition, to battle it out for the huge prize of $100,000. The horses get introduced to the crowd and we finally learn which horses have been selected by each team for this huge challenge. 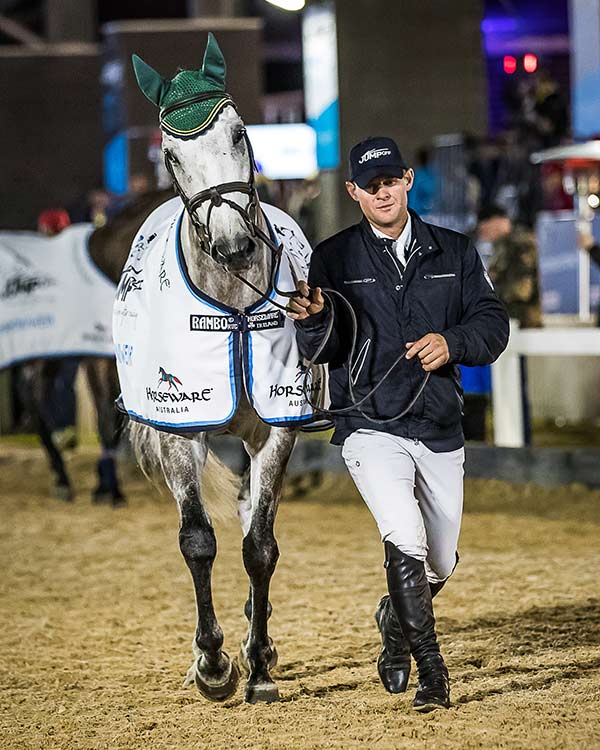 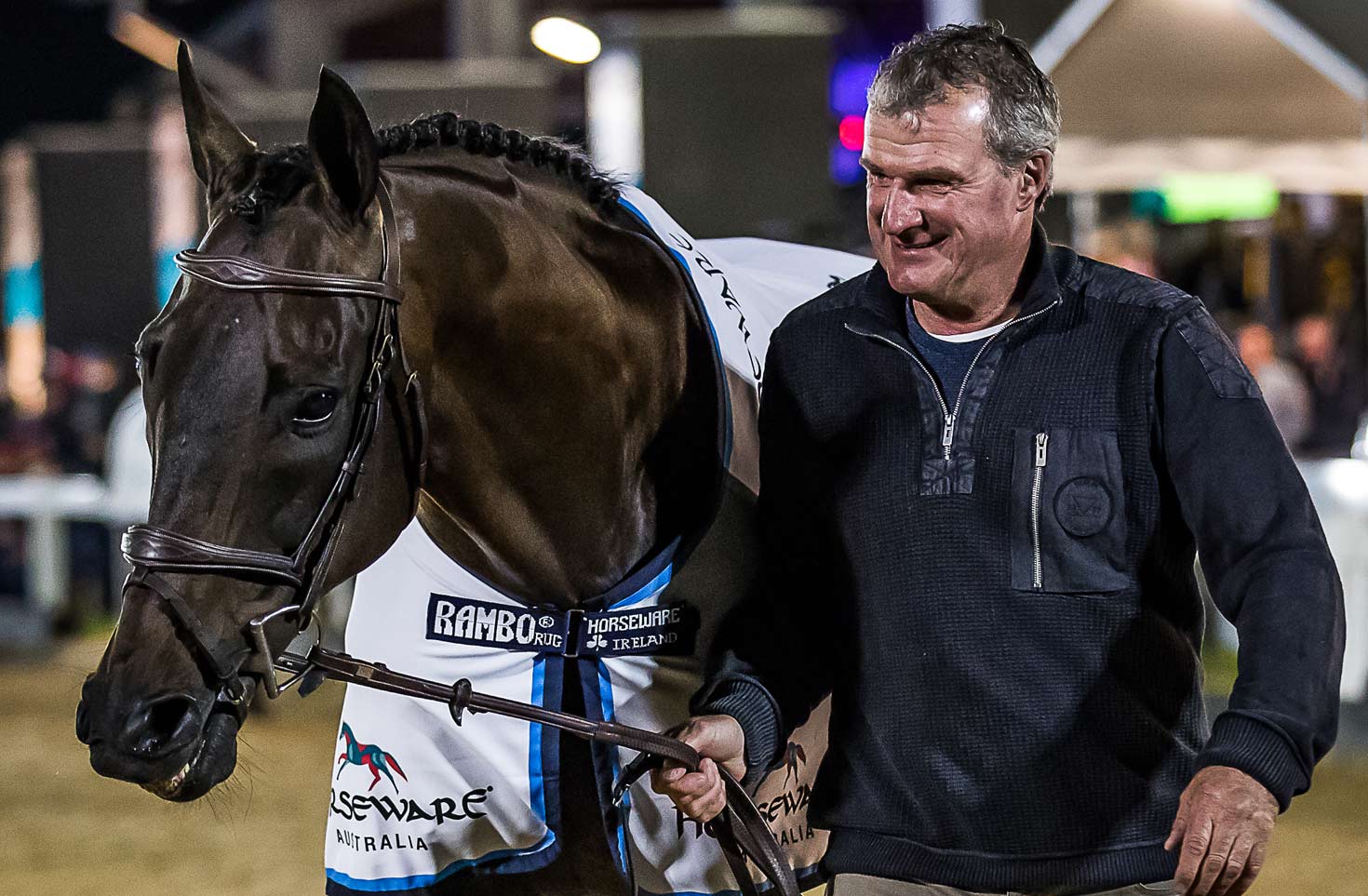 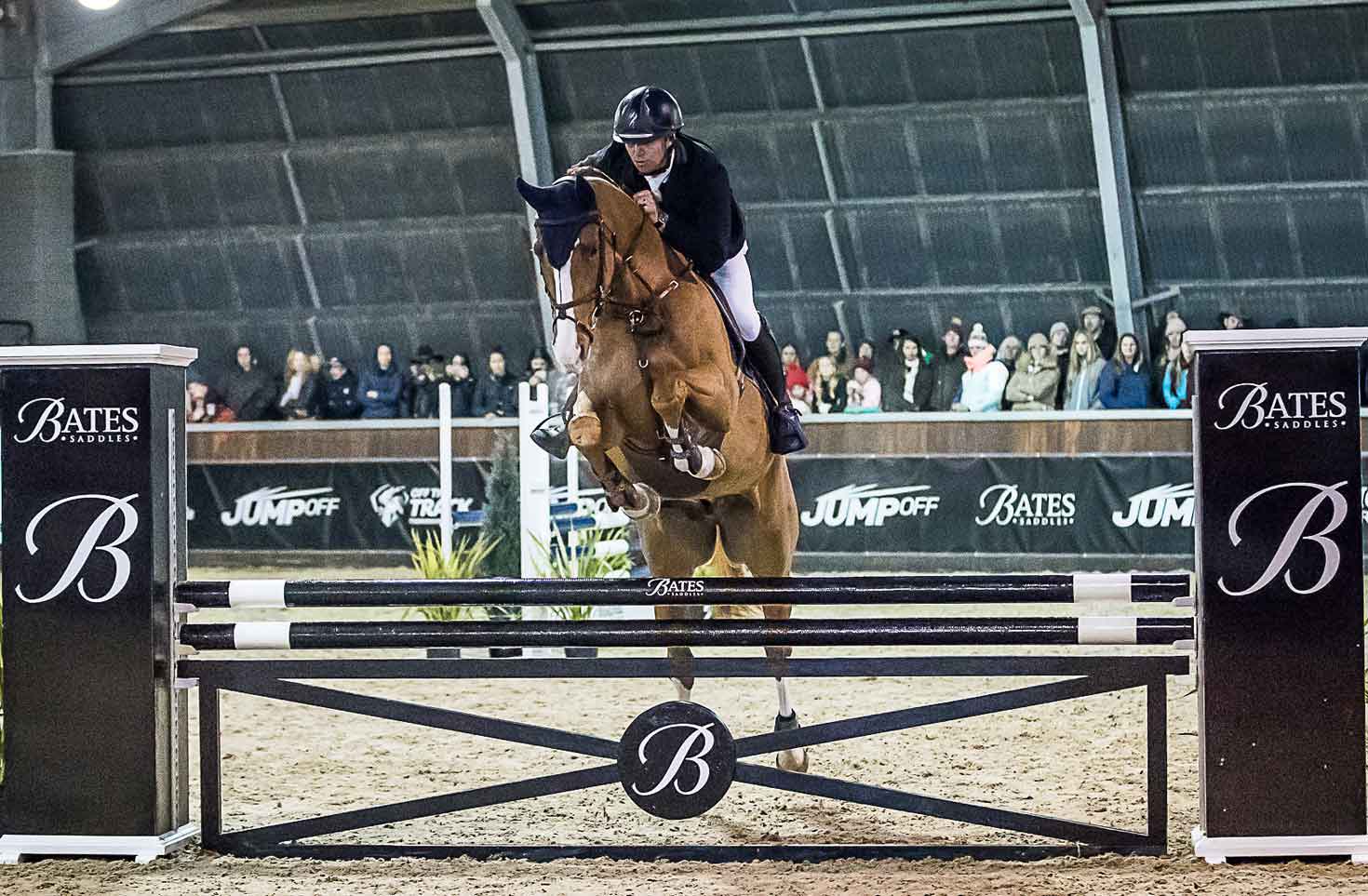 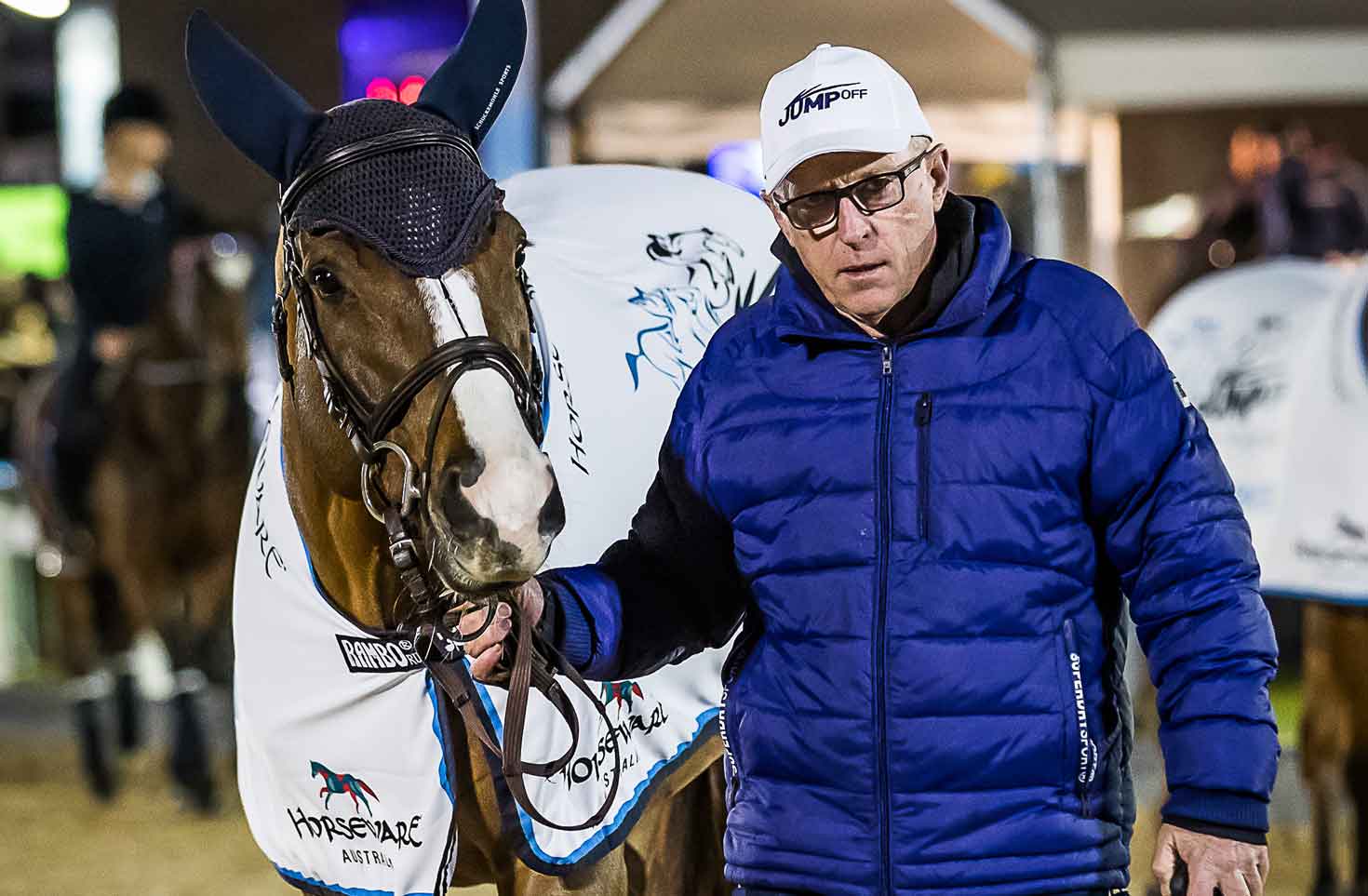 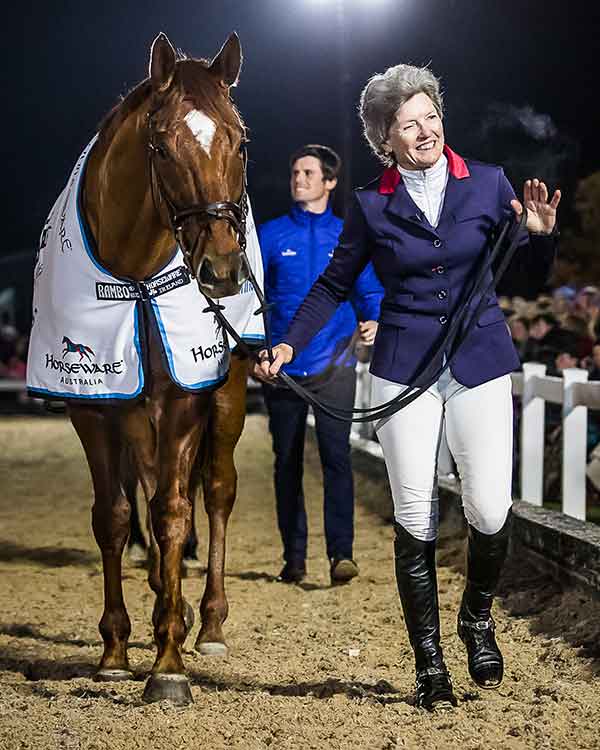 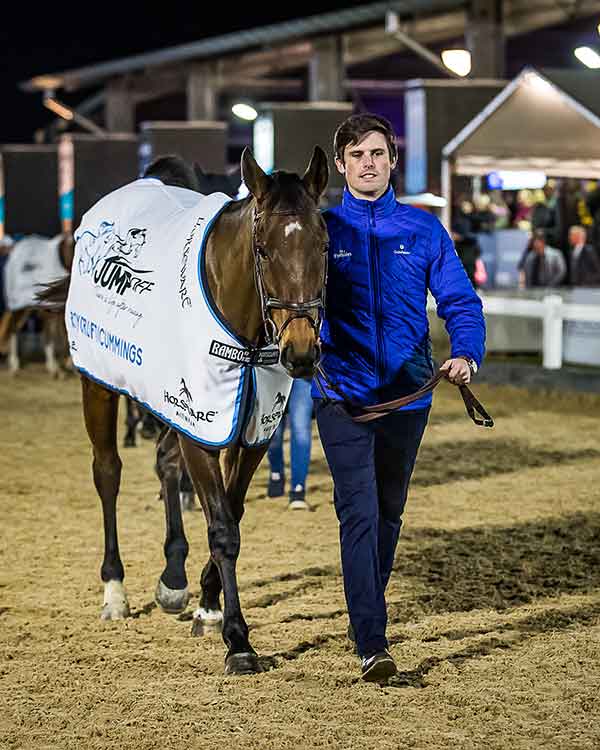 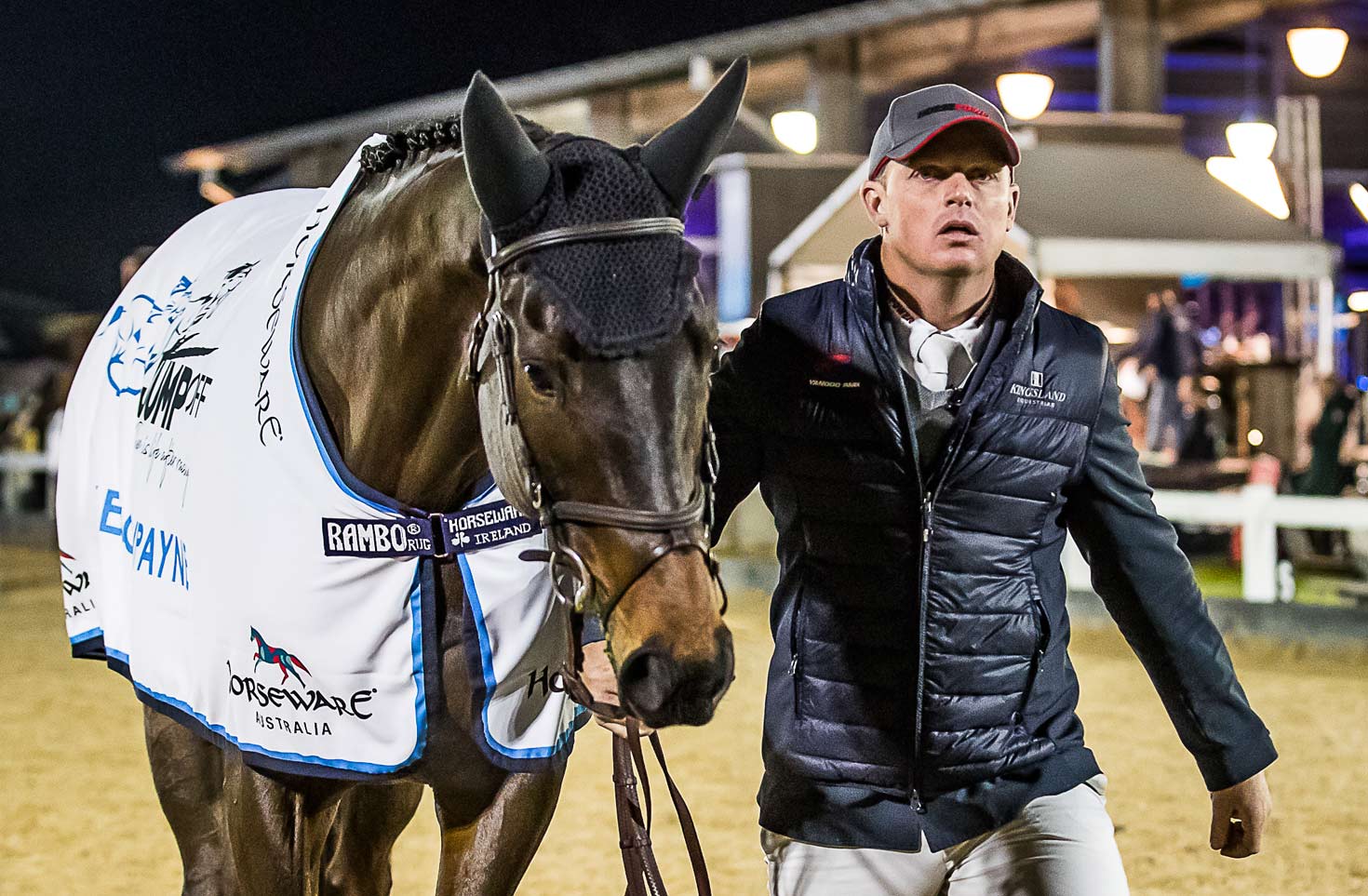 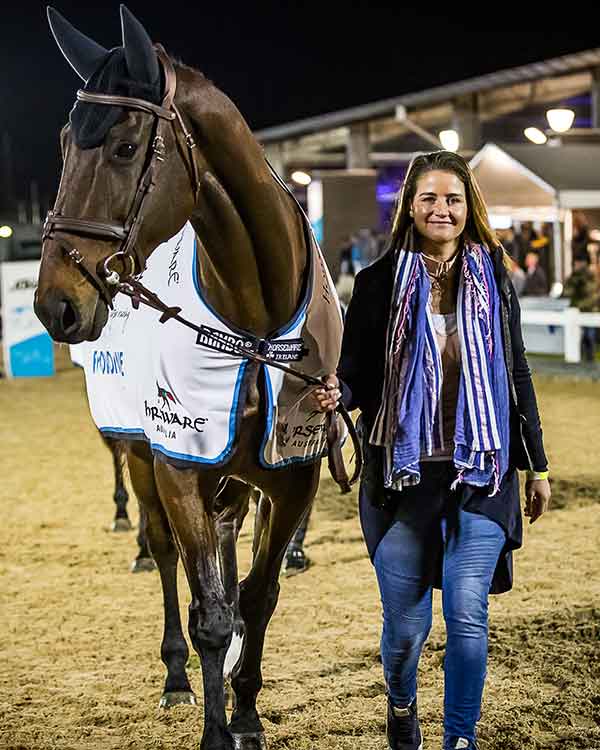 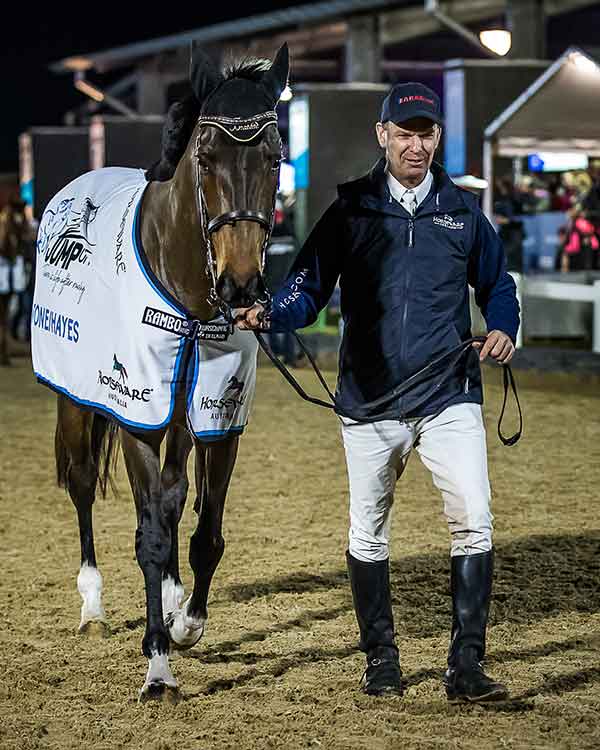 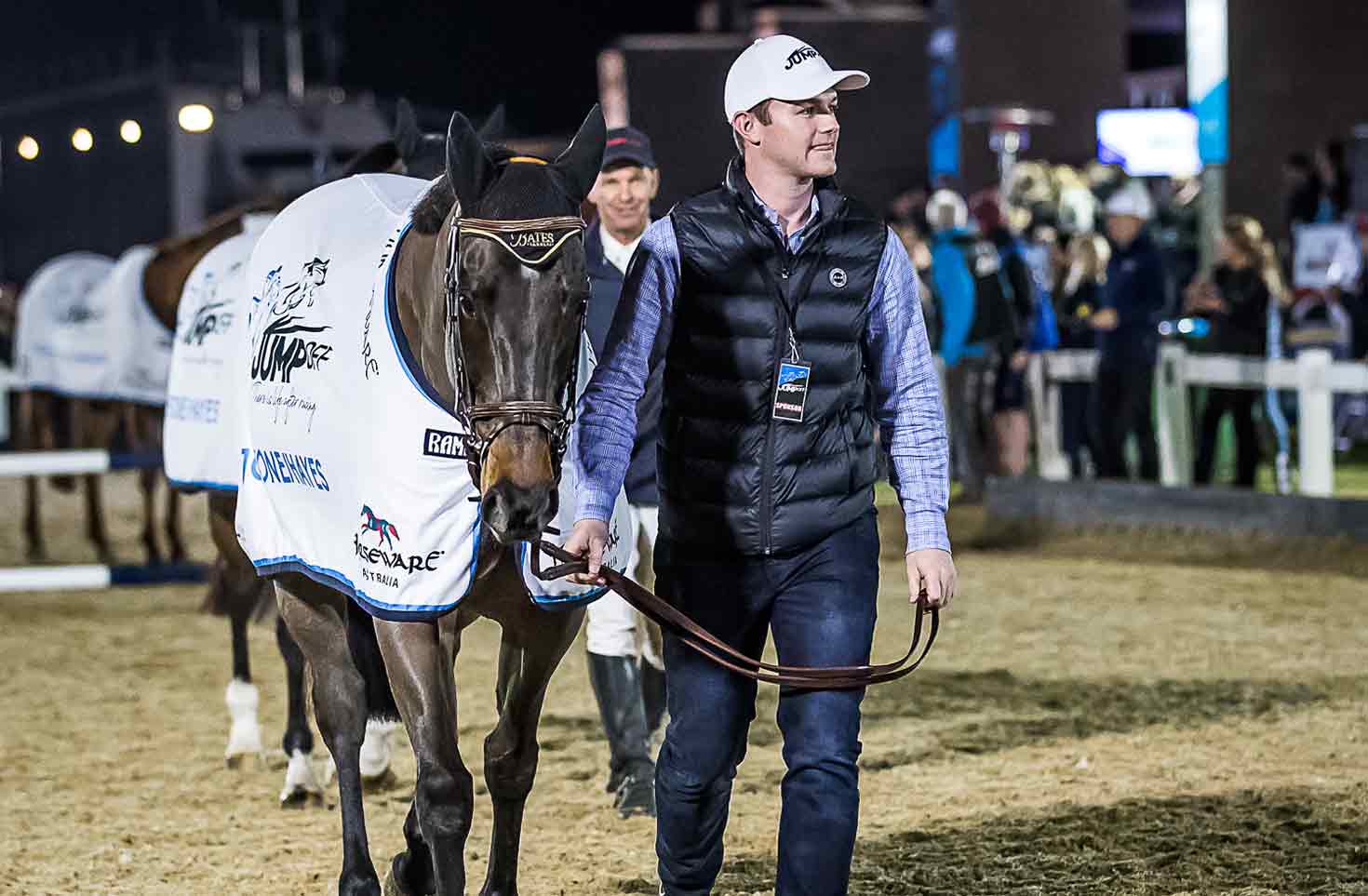 As the competition gets underway, we saw our first two combinations come out.

Peter McMahon and Gotta Take Care were the first out and had a lovely round. Easy obviously loves his new career and does extremely well, with no reaction to the unfamiliar environment. Unlike at Elysian Fields though, the combination had two unlucky rails, so we will have to wait and see if they make the cut for the jump off. 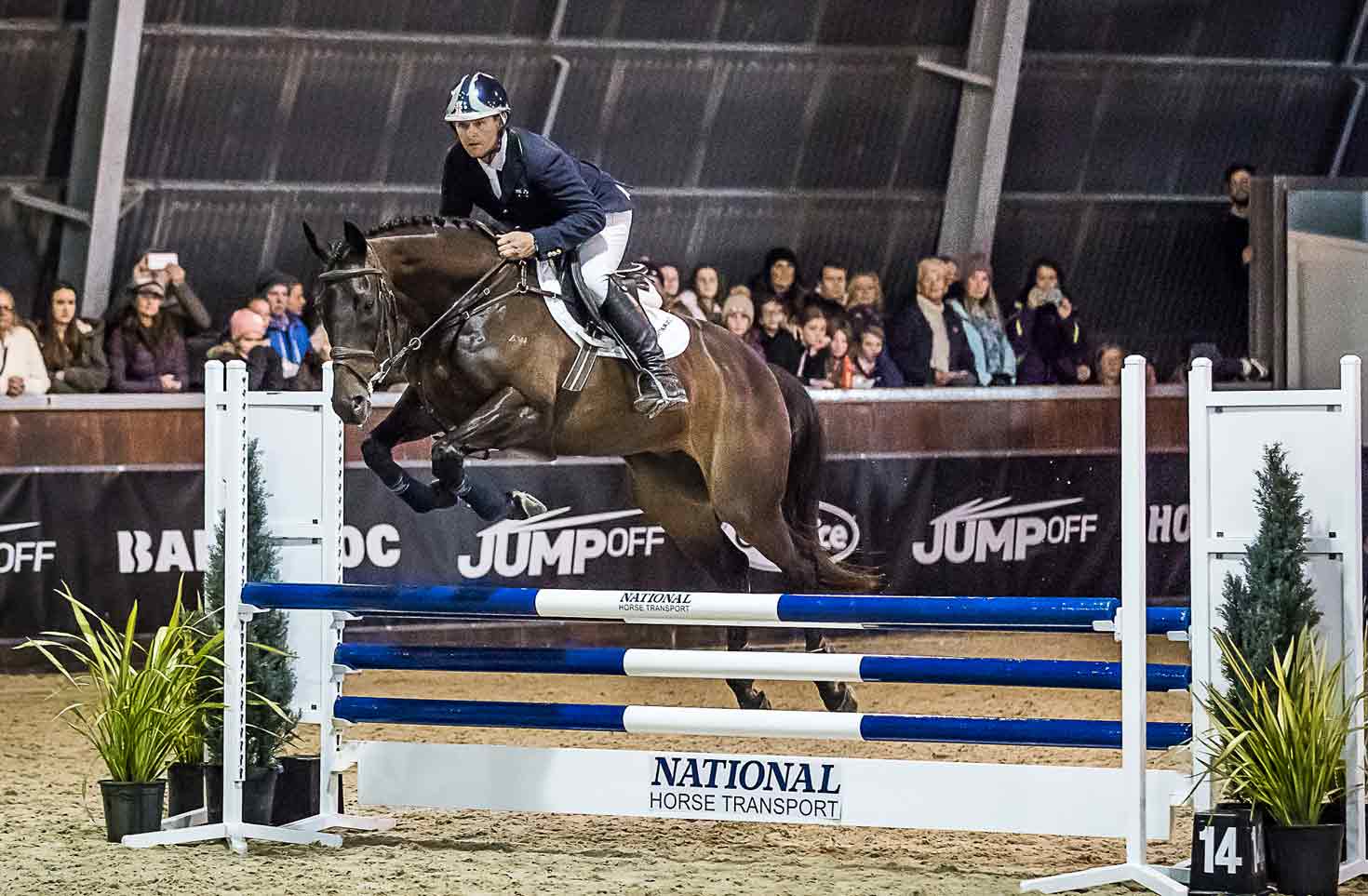 Vicki Roycroft is next out with the horse that caught her eye from the very beginning. Inner Circle has taken to his new career with flare and enthusiasm. It is clear that he loves his new job and Vicki and he complete the course with style and confidence to give this competition it’s first clear round. 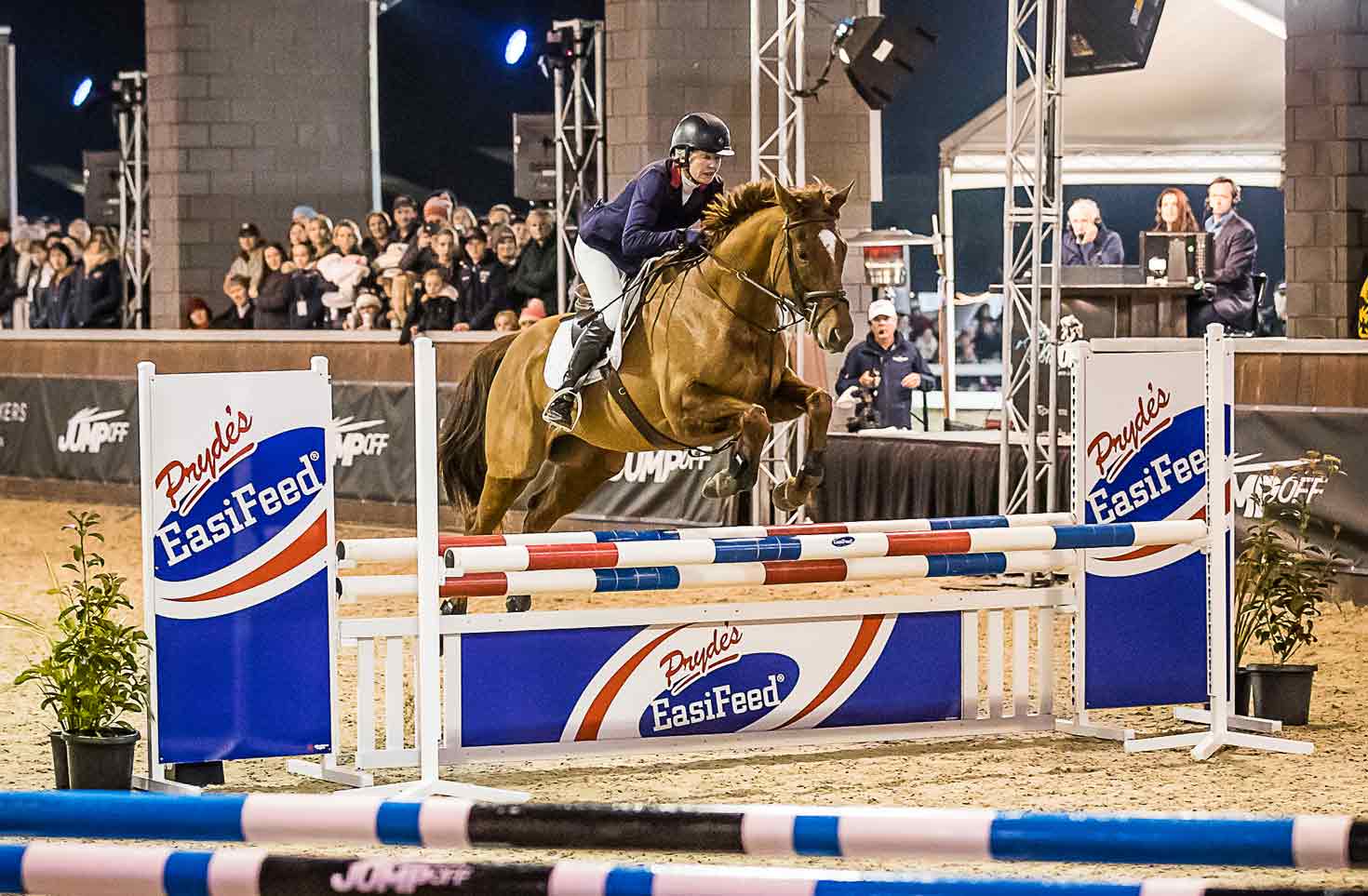 NEXT WEEK ON JUMP OFF

This is it. The competition is well underway at Boneo Park and next week it will certainly heat up, as we find out which horse is the winner of Jump Off and which team takes home the amazing $100,000 in prize money!

Don’t forget, if you missed previous episodes you can watch replays at https://7plus.com.au/jump-off. Replays of Jump Off also air on Racing.com (Ch 78) three times a week. Remember to check your local TV guide to confirm screening times for Episode 6 this Sunday on Seven Network.