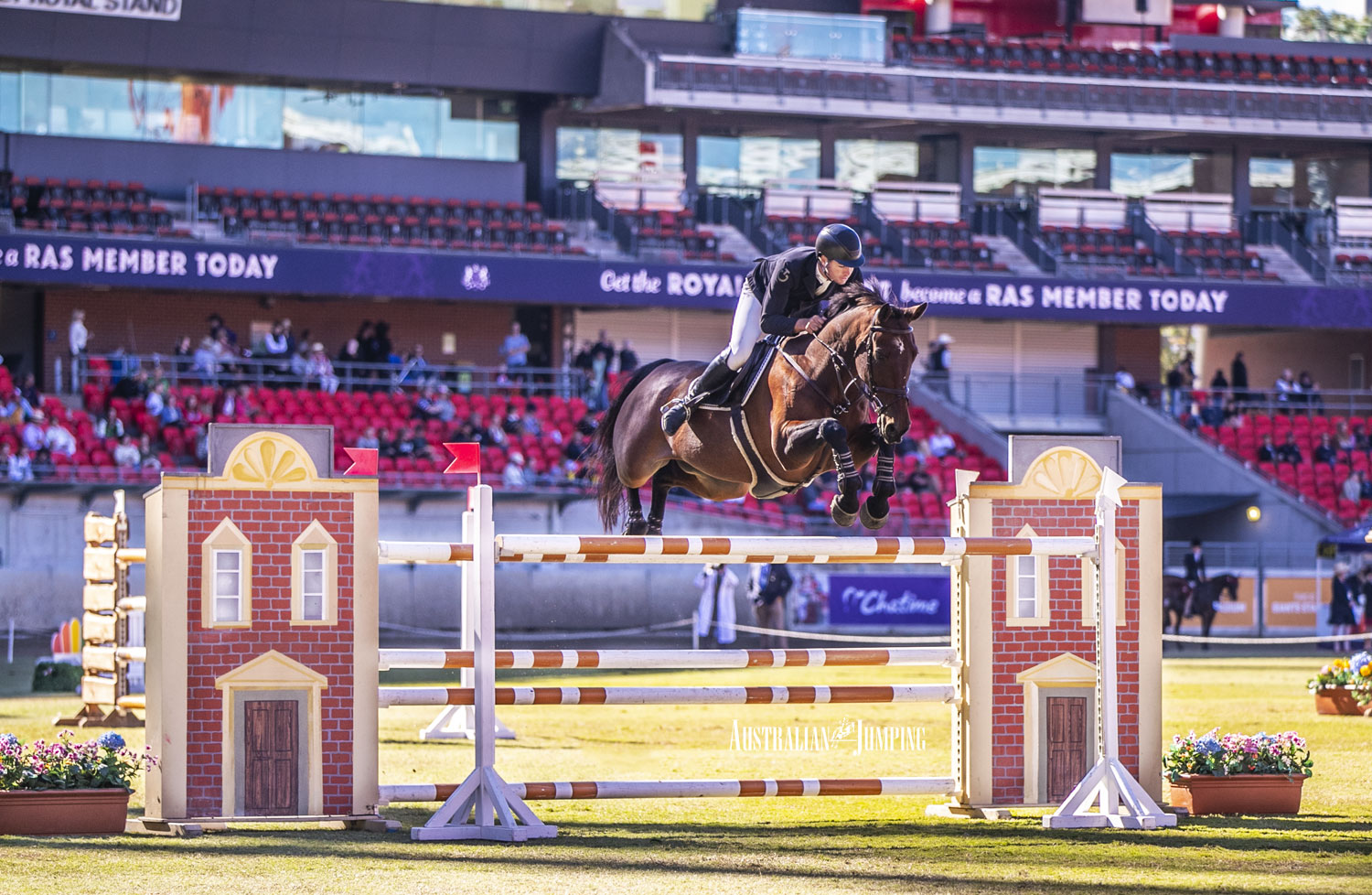 The final and most prestigious class on the Jumping Program at the Sydney Royal Easter Show is the Grand Prix, which was taken out by Tom McDermott and Warraleigh Park Cortez, in a nail-bitter of a finish yesterday afternoon. It all came down to the last rail of the day, before the result was known and the competition kept the crowd captivated right to the end.

The fantastic course made a massive contribution to the spectacle. Befitting the standard of the combinations entered, the rails were lifted to the maximum height and the Graeme Watts designed course (assisted by Aran Ghafouri) looked a spectacular site in the Autumn sunshine, featuring a number of Australiana themed jumps, remnants from the 2000 Sydney Olympic Games brought back to life.

A cracking group of 13 combinations, full of Australian Senior Champions, World Cup Round Winners and Australian Representatives were in the “by invitation only” field and the class was watched by an appreciative crowd.

With only the top eight performances in Round 1 being invited back to compete in Round 2, the pressure was on right from the beginning. In the end, there were only two combinations which completed the course without a rail falling. Fresh from their recent World Cup Qualifier success in Werribee a few weeks ago, Amber Fuller and CP Aretino were clear in a time of 83.15 seconds, while Tom McDermott and Warraleigh Park Cortez, incurred just a single time penalty. As there were a further five combinations who incurred four penalties, they were all invited into the second round. The eighth spot in the second round went to the fastest combination on eight penalties, James Arkins and Eurostar 1. 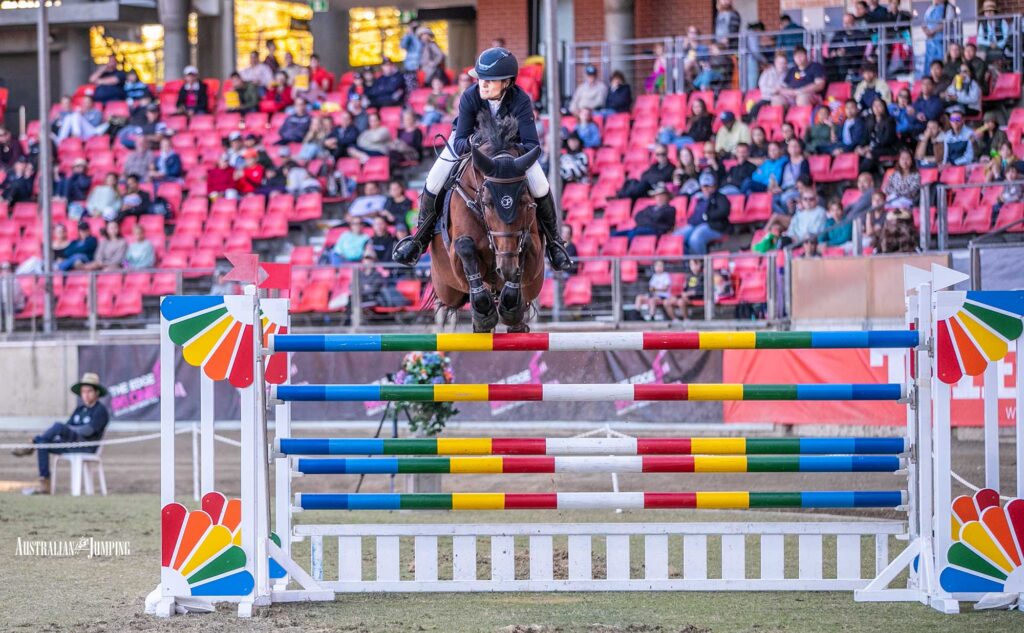 First out in the second round was Arkins and Eurostar 1, who took just a single rail to add to their eight first round faults to finish with a total of 12. Shortly afterwards, the slowest 4-fault combination of Kate Hinschen and Finch Farm Cadel were on course, however they did not have their best round, collecting four rails to finish on a total of 20.

Next out was Jamie Kermond and his superstar gelding Yandoo Oaks Constellation, who were the first combination to go clear in the second round, meaning that they finished with just four penalties in total and were now holding a large lead with five combinations to come. Their time of 61.10 seconds was also going to be very competitive. To watch Jamie’s round, click HERE

Aaron Hadlow and Vahlinvader from Dapto, near Wollongong were next, but unfortunately for them, they took a rail in Round 2 to add to their Round 1 rail to finish on eight penalties.

Next out was Izabella Stone and Lincoln MVNZ, the youngest horse in the competition. They had a fantastic round, going clear and thereby finishing on 4 penalties. To watch Izabella’s round, click HERE. Their time of 62.49 seconds was just a touch slower than Kermond’s, however second place was not a bad place to be with just three combinations to come.

The next combination out was Billy Raymont and Anton, with Raymont fresh from his victory in this morning’s Mini-Prix. (Click HERE for the full story). They were having a great round but unfortunately after a refusal at the last Raymont and Anton parted ways and his chance of taking the double today evaporated.

Tom McDermott and Warraleigh Park Cortez were next on the course, holding the advantage of coming into Round Two on just one penalty. It was a particularly cautious ride from McDermott as he knew that if he could get around with out a rail and within the time, the worst he could do was come second and apply the pressure to the last combination to come. Their time was 71.45 seconds, which was over 10 seconds slower than Kermond, however, the tactic worked perfectly. To watch Tom’s round, click HERE. They finished in the lead, with just one total penalty and now it was all up to Amber Fuller and CP Aretino.

Fuller also adopted a cautious approach. There was no hurry and if she could emulate McDermott’s performance, the win would be hers. All was going well until they were reached the last fence. Just when Fuller could see the finish line over the fence and near certain victory, the top plank of the Australian Flag jump clattered to the ground behind them, to a huge groan from the crowd. Their finish time of 67.14 seconds was enough to slot them into fourth place. To watch Amber’s round, click HERE.

It was a well-deserved win for McDermott and Warraleigh Park Cortez as they were the only combination for get around both courses without taking a single rail. For Fuller and CP Aretino, it was a case of so close but yet so far with just a single rail at the last being the difference between victory and fourth place.

The Frank Thomas Memorial Perpetual Trophy donated by the family of the late Mr F K Thomas, for the owner of the winning horse in the Sydney Royal Easter Show Grand Prix was presented to Tom McDermott on behalf of the owners. To watch the presentation, click HERE. 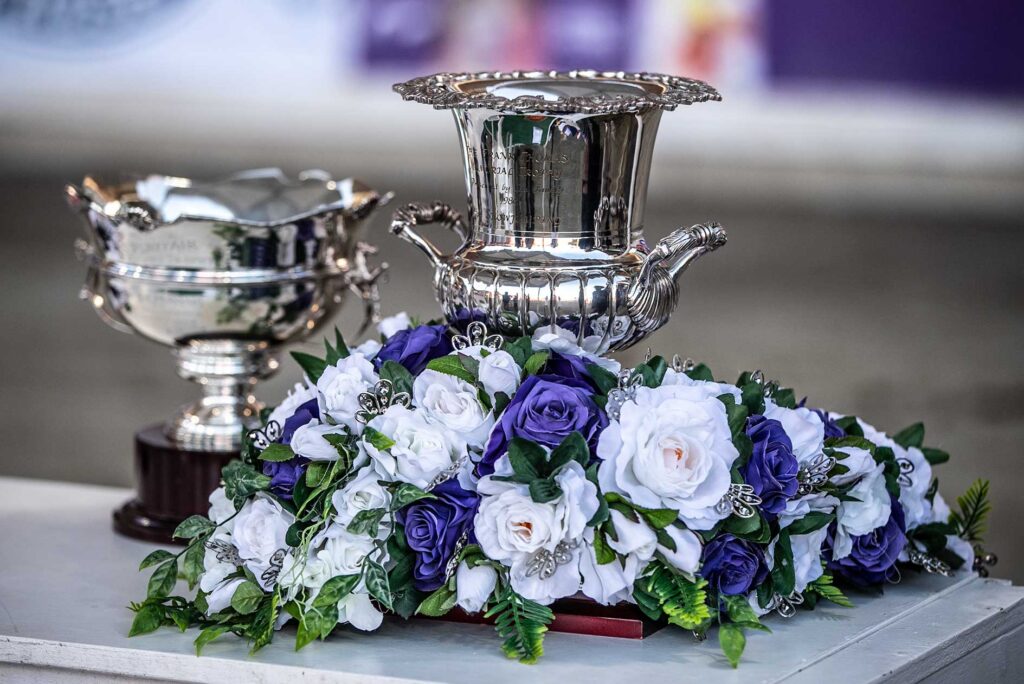 To conclude the Jumping program there was a number of presentations made to the champions of the Jumping program. These awards are made on the basis of points accumulated over the course of the week by placing in the first 5 (6 for Young Horses) in each class.

The first award was made for the Young Jumping Horse of the Show. To be eligible for this award, horses have to be 8 years of age or under and the ribbon for this honour was presented to Eurostar 1, which was ridden with much success by James Arkins. To watch the presentation click HERE. 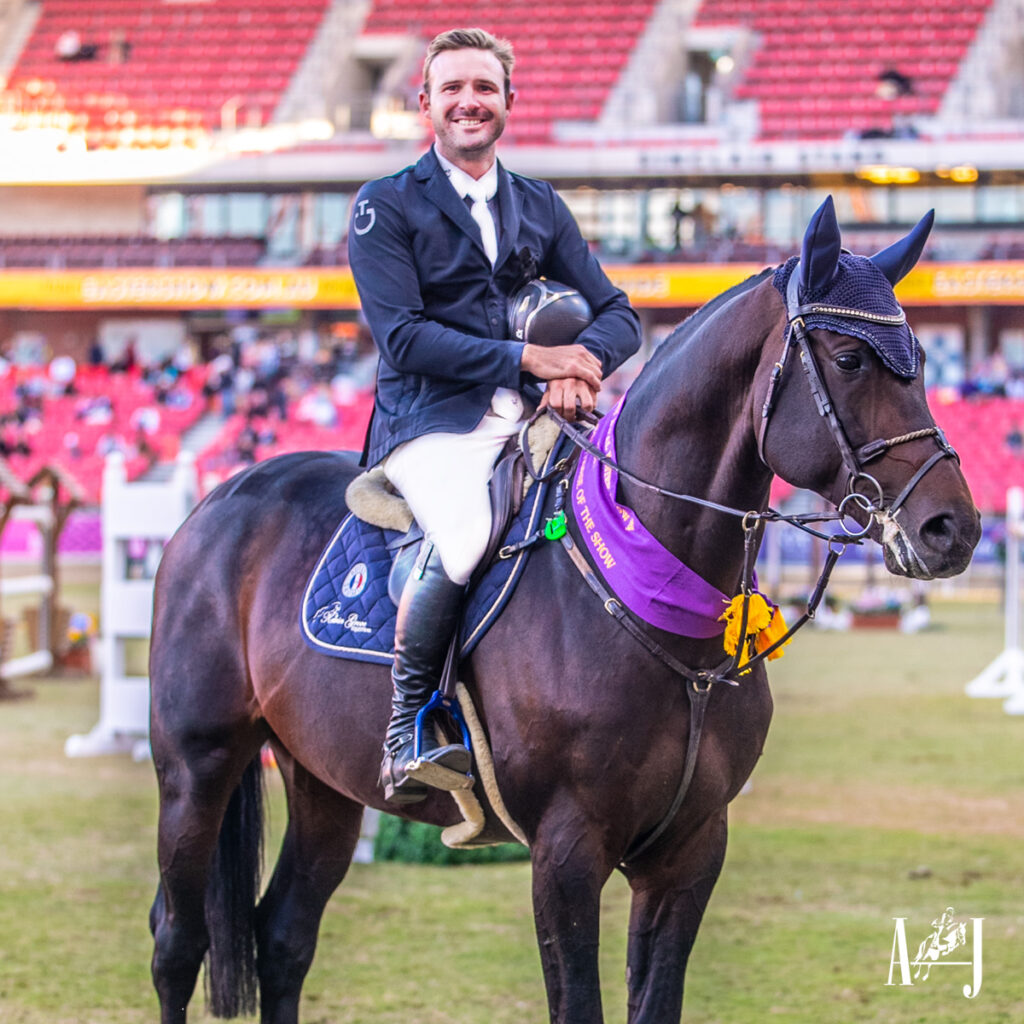 The next award was the Samuel Hordern Memorial Perpetual Trophy donated by members of the Committee of the Equestrian Federation of Australia (NSW) Ltd for the Jumping Horse of the Show. This trophy was presented to Yandoo Oaks Constellation, ridden with success by Jamie Kermond. To watch the presentation, click HERE. 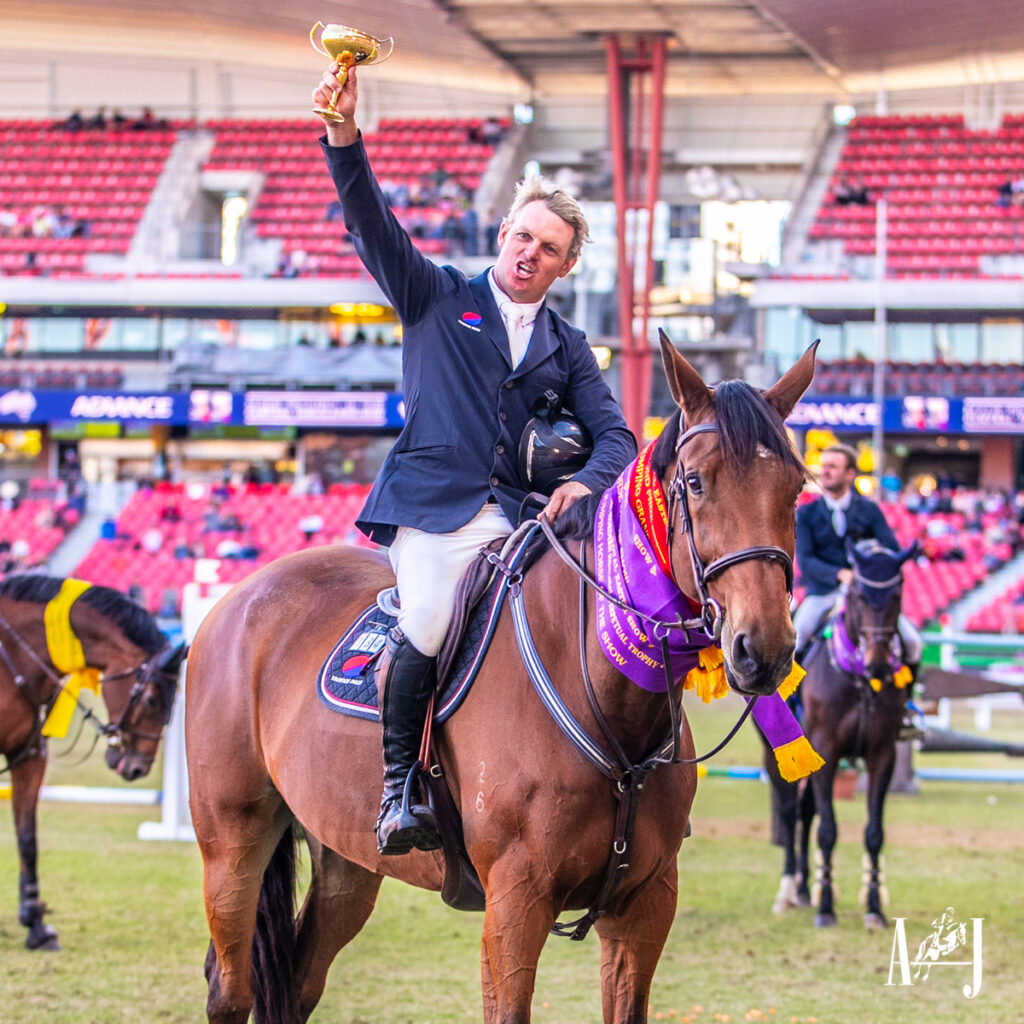 The final award of the program was the E S Playfair Perpetual Trophy, donated by the late Mrs E S Playfair, for the Most Successful Rider in Senior Jumping Contests.  The trophy was awarded to Tom McDermott. To watch the presentation, click HERE. 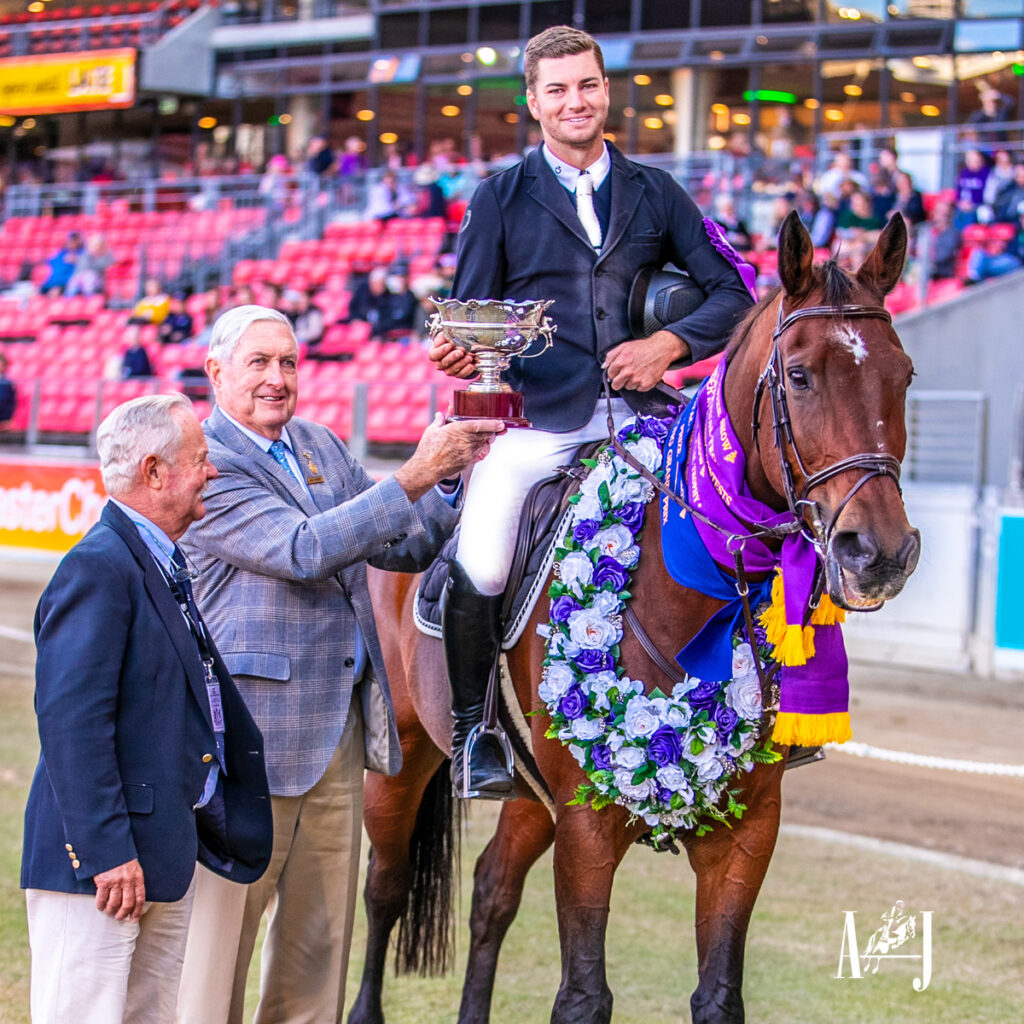 So ends a fantastic 11 days of jumping at Sydney Royal. Congratulations goes to the winners and placegetter of all the classes.