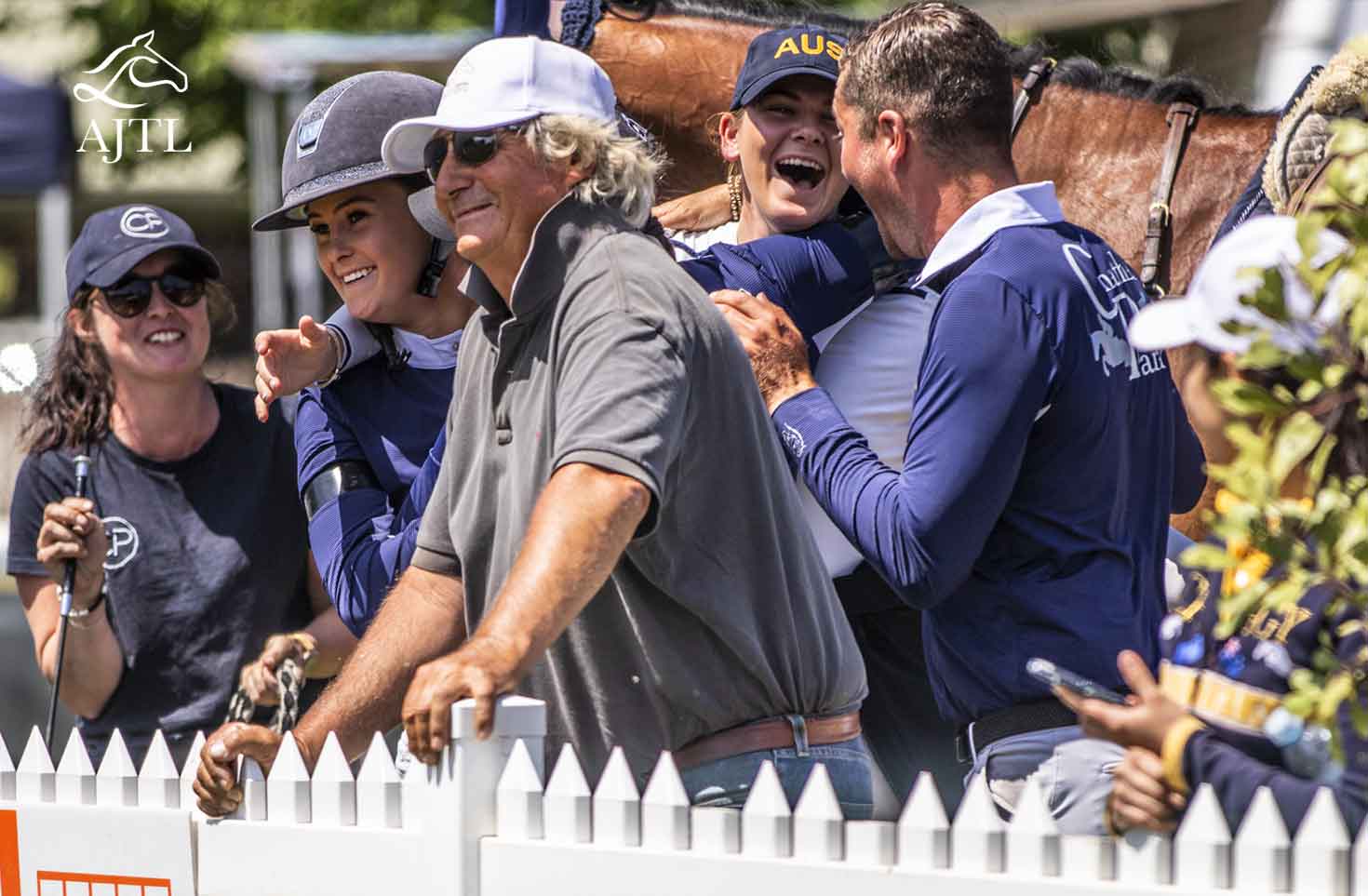 This afternoon saw the running of the third leg of the Australian Jumping Teams League (AJTL) series for 2019 at Sale, in Victoria, as part of Elms World Cup Show. With the series at the half way point going into this leg, it was desperate times for most teams as they either faced a steep climb up the leader board to reach the top before the Series concludes, or the pressure of trying to stay at or near the top.

As with the previous rounds, each team was required to name its three competing combinations and their order yesterday and to recap, here are the riders named for each team.

In a departure from the usual jumping attire of jackets and ties, the teams for the AJTL ride in long sleeved polo shirts in their team colours. Today, black arm-bands were worn by the riders from all teams as a mark of respect for the recent passing of a great friend to many, Carole Mason. Having not had the pleasure of meeting Carole ourselves, we asked Greg McDermott about his great friend Carole who he described as “a lovely person”. In her younger years, Carol was a competitive showjumper, who continued as a huge supporter and lover of the sport and was an owner of a number of great horses. Many current riders, have had the opportunity of riding one of Carole’s horses over the years and it was particularly pertinent that Glenara Cognac, ridden today by Alison Rowland is owned by Carole’s estate.

Today’s competition saw jumping of the highest quality with ten combinations recording double clears, however it was the closeness of the competition and the excitement as the competition reached its climax that will most be remembered by the spectators.

Warm sunny conditions greeted the riders as they, one-by-one, tackled the course built by Gavin Chester as a small but knowledgeable crowd watched on.

As they did in Sydney in the second leg, Will Dight (TAK) and Thea were the first combination on course and started with a couple of rails and a time penalty. The very next combination on course was Chris Chugg (EIA) and his mare KG Queenie, who immediately proved that the course could be mastered by going clear with a time more than four seconds under the time allowed of 84 seconds. When Jessie Rice-Ward (EMC) and Dusky Farm Cavalier, fourth out, also went clear, the day might have started to look a little ominous for many of the other teams. In just four combinations, the two clears were recorded by the top two teams on the leader board coming into this leg. By the time that each team had seen one combination tackle the course, there were still just the two clears, however two other combinations, Amber Fuller (CHA) and CP Aretino and Brook Dobbin (MAR) and Gina MVNZ had recorded just a single time penalty. 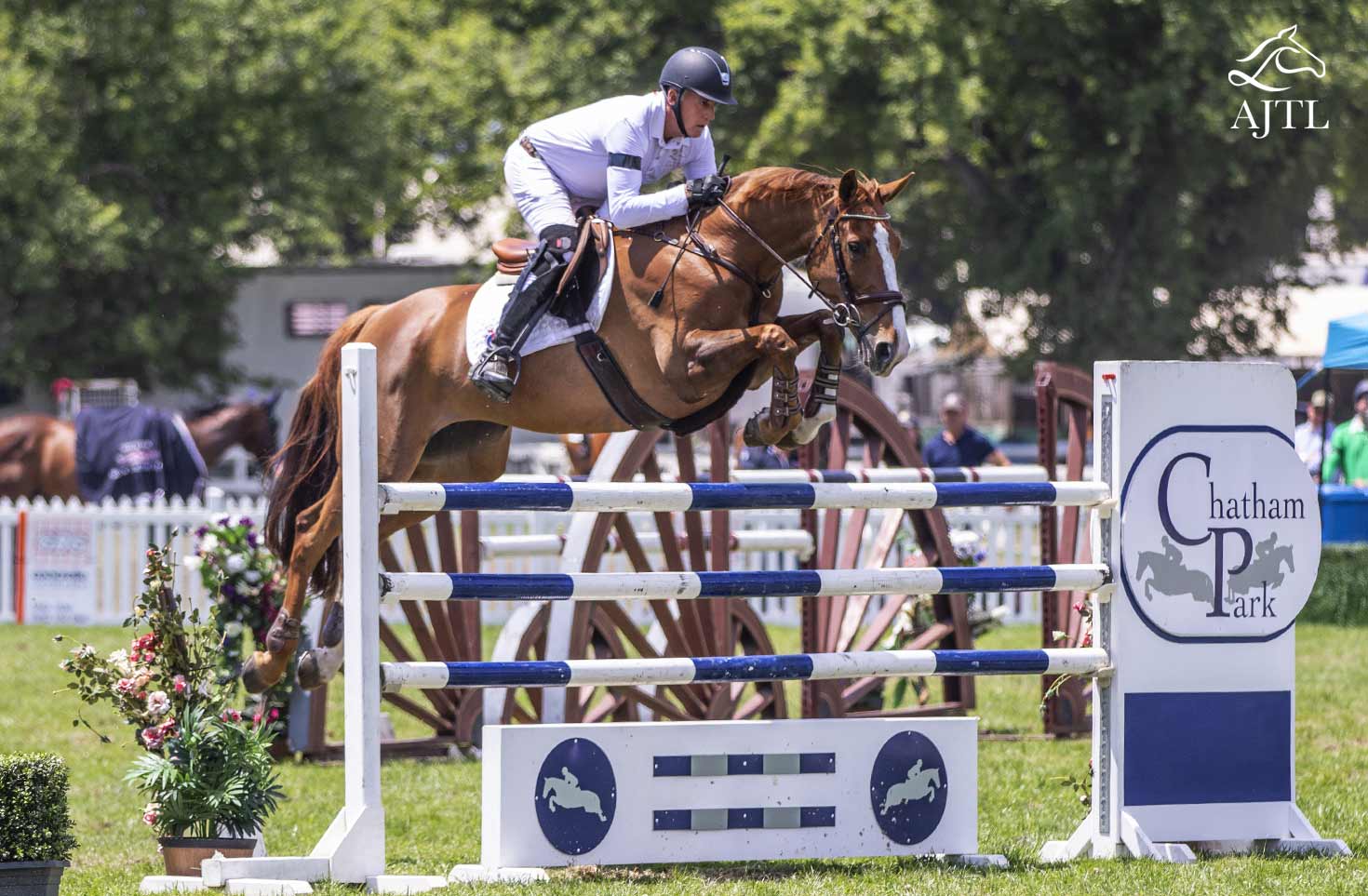 This set the precedent for the these teams as clear rounds came thick and fast for the rest of the combinations. For Team Equine International Airfreight, clears were recorded by Elliot Reeves and Aveden Indigo as well as James Arkins and Eurostar, leaving them on a perfect score of zero after Round One. Not to be outdone, Series leaders Team Emcee Apparel saw clears recorded by Jess Tripp and Diamond B Verona and Jennifer Wood and Cocaine Ego Z, to also finish on the perfect score, however, with a slightly slower combined time, they were relegated to second. Billy Raymont and Anton rounded of Round One with a clear for Willinga Park – leaving them in a good position for Round Two should any of the leaders faulter. 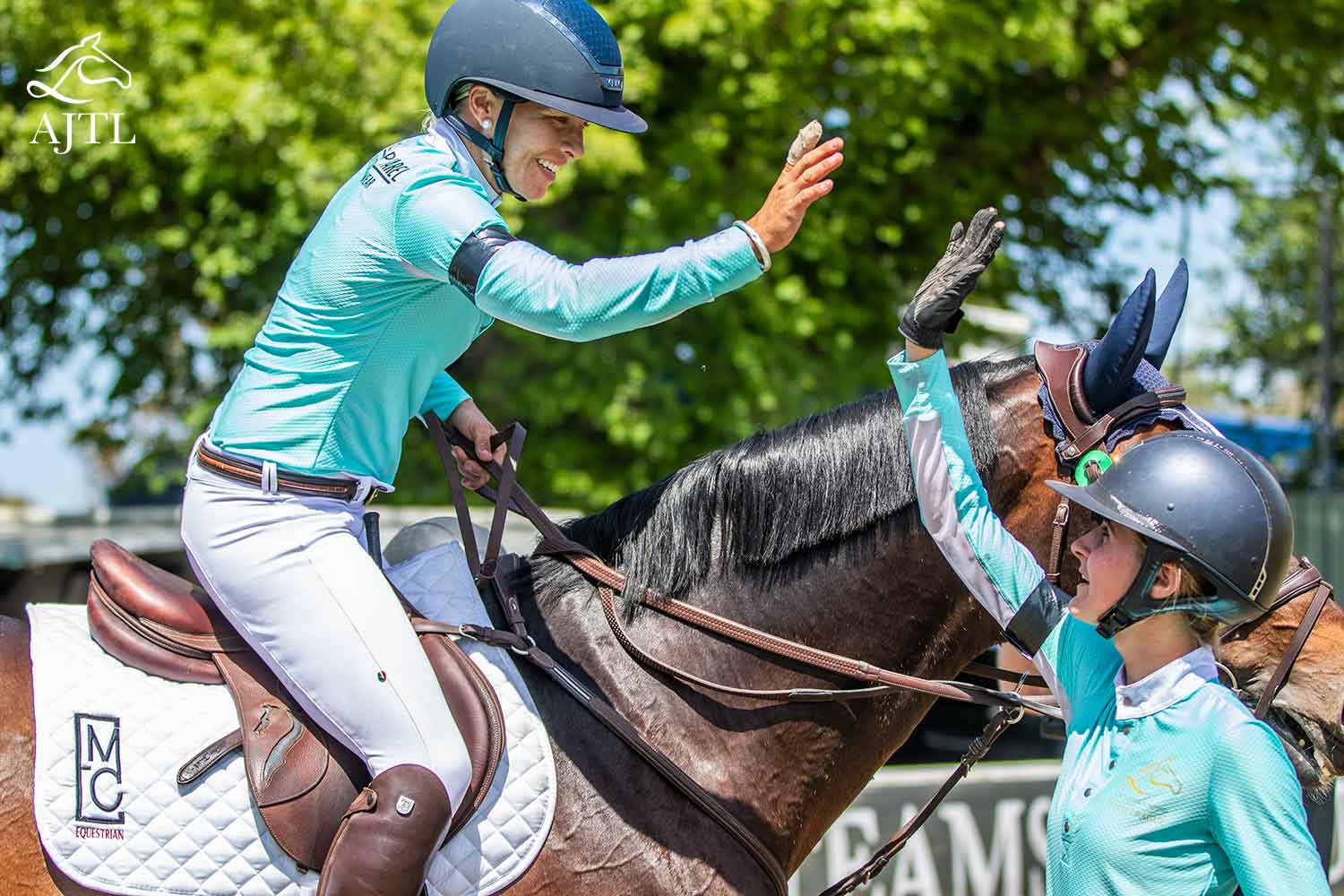 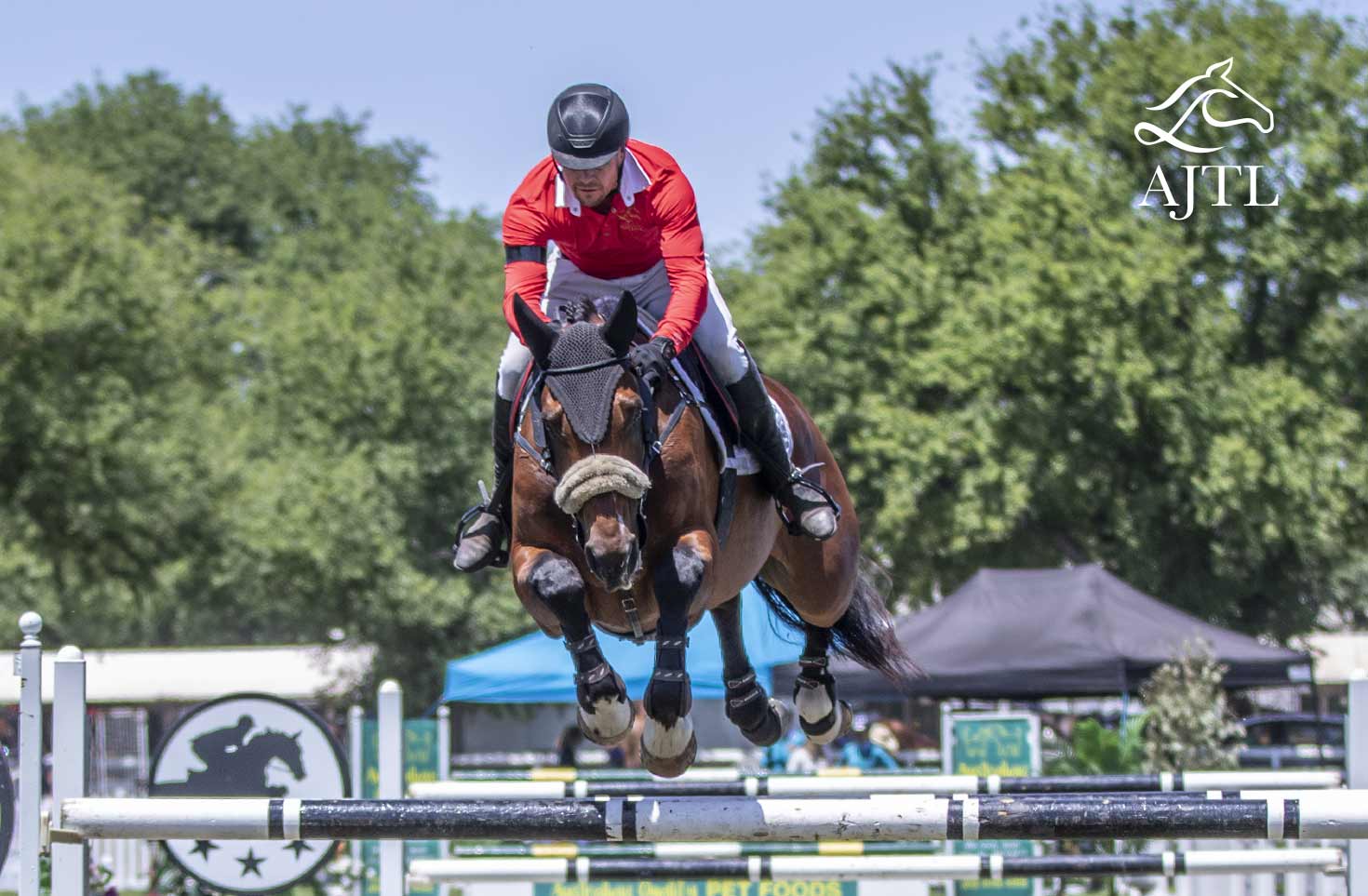 The following table lists the number of penalties incurred by each combination in Round One.

*After initially refusing a fence, Madi Sinderberry and Ciel retired from the round and as a result, in accordance with AJTL rules, were allocated a score equal to the highest number of penalties incurred by any other rider, plus 20.

By combining the above scores for each team, the team standings after Round One were as follows:

Unfortunately for Team Yandoo Park and Team Horsepower this was the end of their competition today, as only the top eight teams were eligible to continue on to Round Two. With only a rail separating the top five teams and four within a single time penalty, Round Two had all the prospects of being a real nail-biter.

Coming out in reverse seeded order, the first three combinations all recorded a rail, causing these teams to fall further behind the leaders. Team Martin Collins Australia, represented by Brook Dobbin and Team Chatham Park, represented by Amber Fuller both went clear to keep their teams on just a single penalty and breathing down the next of the two leading teams. If Jessie Rice-Ward was feeling any pressure, she certainly didn’t show it as she completed a clear round, her team’s fourth of the day to keep Team Emcee Apparel on the perfect score of zero. Chris Chugg was next out, however, unfortunately for him and his team, they accidentally took a jump out of order and were eliminated from the round. The penalties applied to his score took his team out of contention leaving three teams with just a point separating them. Four rides completed, two to go.

During the second wave of Round Two, the two under 25 year old riders, Amelia Douglass (CHA) and Sirius Du Granit and Jamie Priestley (MAR) and Courage both recorded their second clear rounds of the day, to keep their teams tied in second place on just a single penalty with one ride to go. Soon after, Jess Tripp (EMC) and Diamond B Verona got their chance to keep their team in the lead, but so tight was the competition, they were going to need their team’s fifth consecutive clear round to do so. Unfortunately for them they took just a single rail to drop the team back to third, leaving Team Chatham Park and Team Martin Collins Australia tied in the lead with just a one combination to go each. 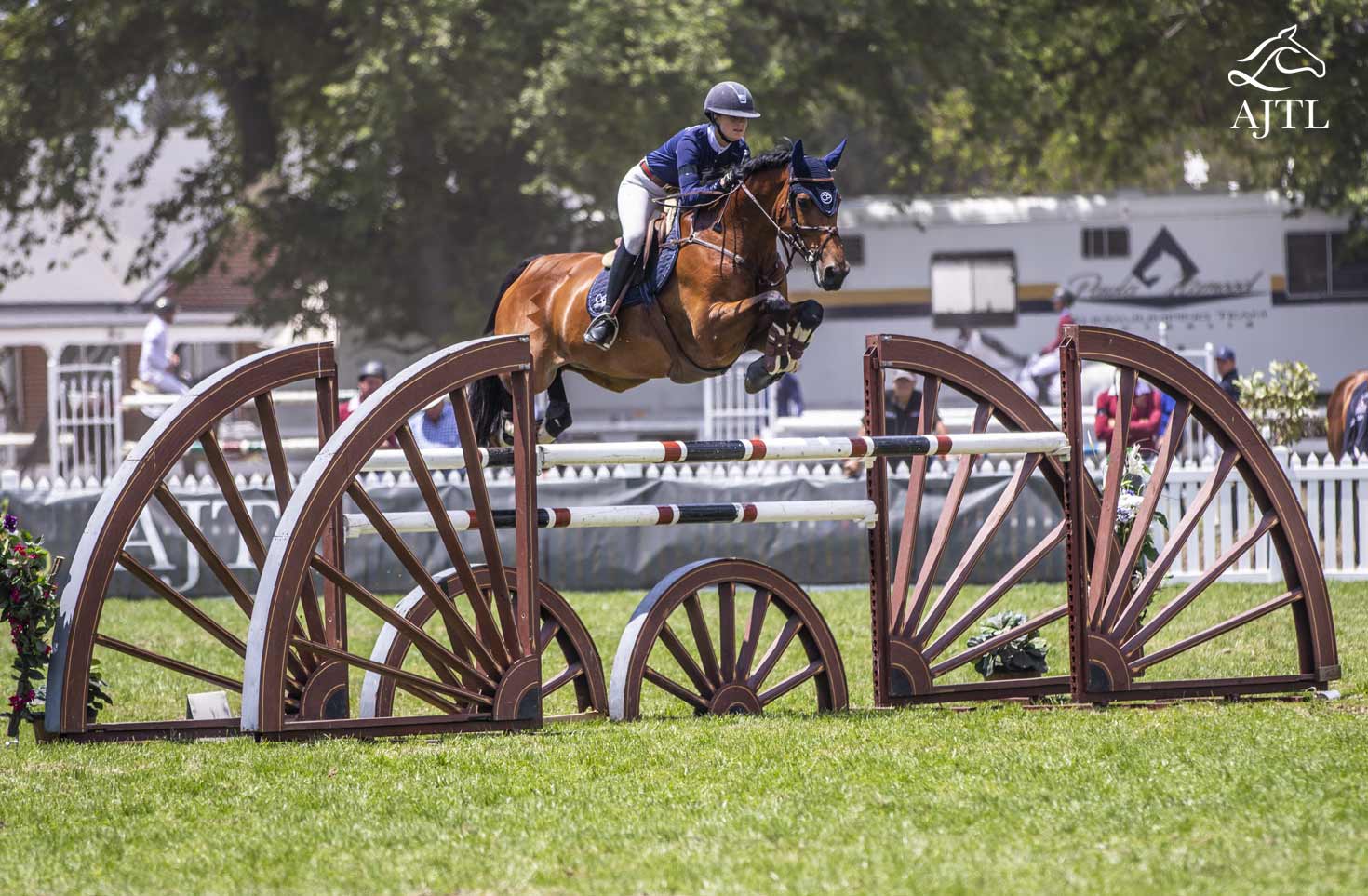 The last combination for Team Chatham Park was Tom McDermott and Elegance De La Charmille and to say that they are currently in form would be an understatement. In fact, with wins in the Australian Senior Championship two weeks ago (click HERE) and a win in yesterday’s World Cup Qualifier (click HERE), it is impossible to imagine that they could be in better form. As he has a habit of doing lately, McDermott and “Charmille” rose to the occasion, completing a clear round in a very fast time, meaning that Team Chatham Park had finished on just a single penalty, throwing down the gauntlet to Rhys Stones (MCA) and Tulara Colmar. The commentators did some quick caclulations and told us that Stones had to not only ride clear, but if he did, it would come down to times to determine the Leg winners and therefore he had to finish in less than about 70 seconds. 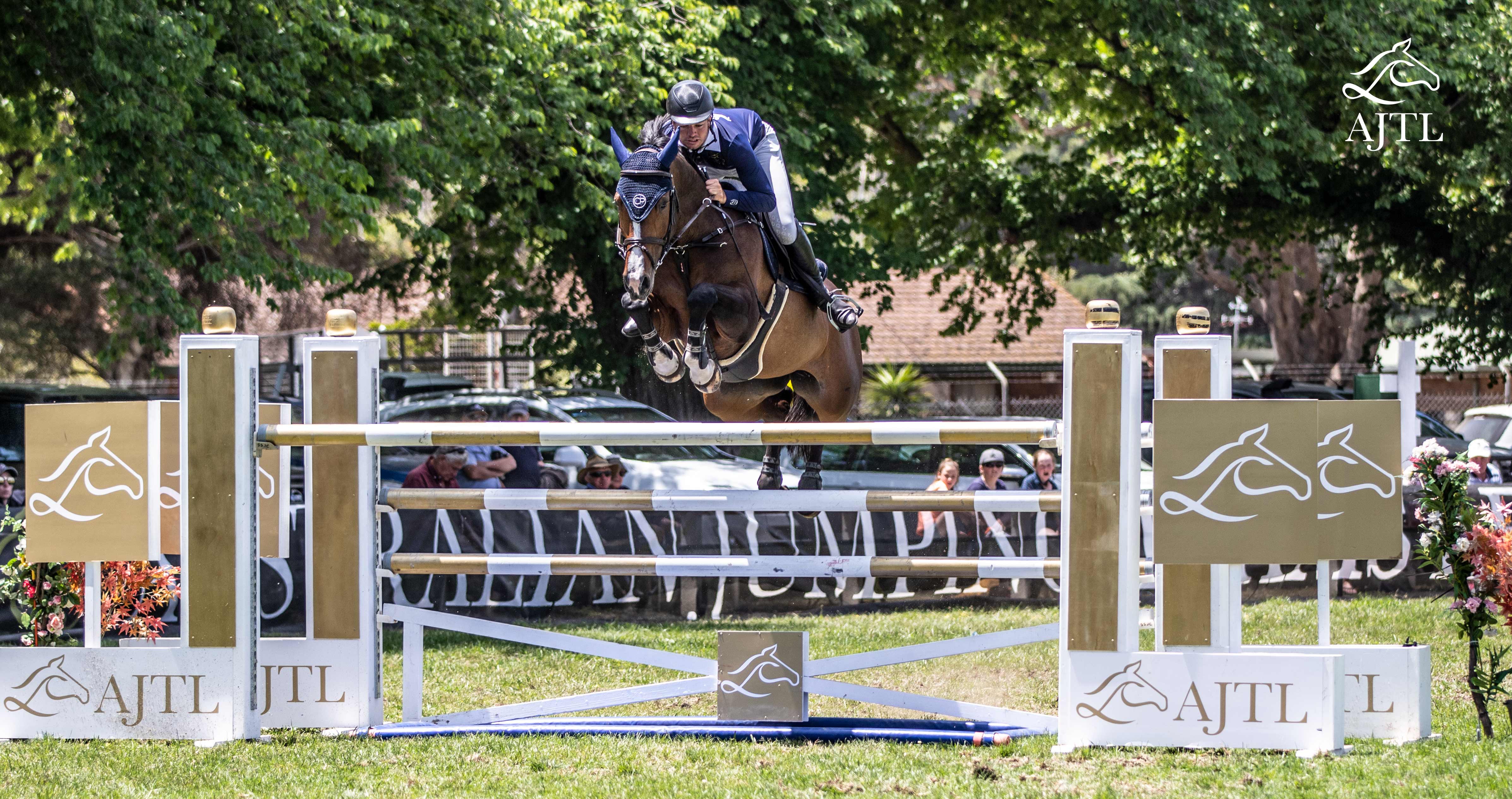 The crowd held their breath as Stones and Tulara Colmar travelled the course, however, when they knocked a rail down towards the end of their ride, two sounds occurred nearly simultaneously. The first was a gasp from the crowd, who instantly knew that Team Martin Collins Australia’s chance of winning was gone, while the second was an excited yell of joy from the Chatham Park Team who knew that they could not be denied victory. Stones and Tulara Colmar went on to take another rail with them before finishing, giving Team Martin Collins Australia a total of nine penalties to finish fourth, making this by far their best leg of the series, given that in both previous legs, they had been eliminated prior to the start of round 2. 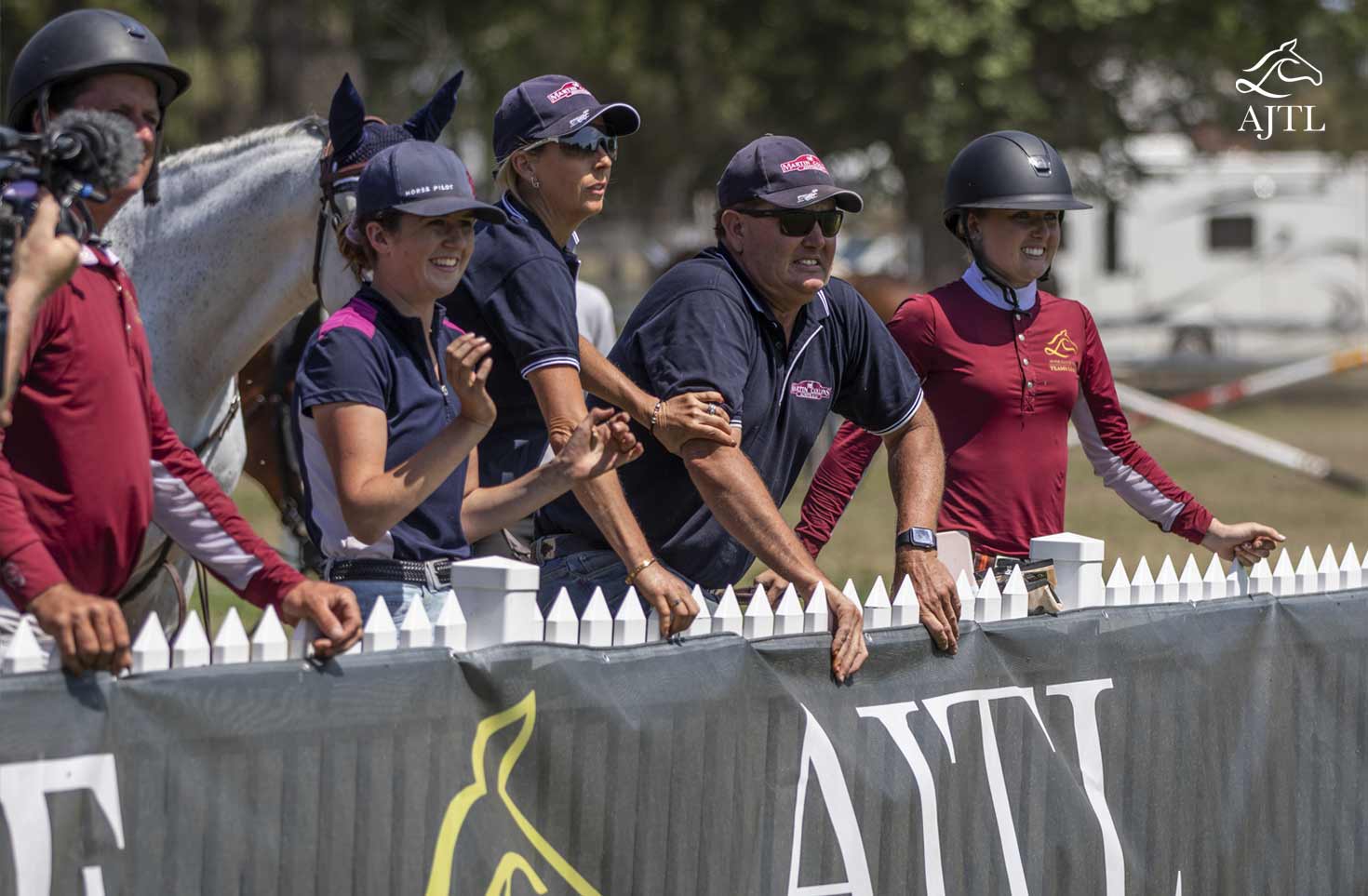 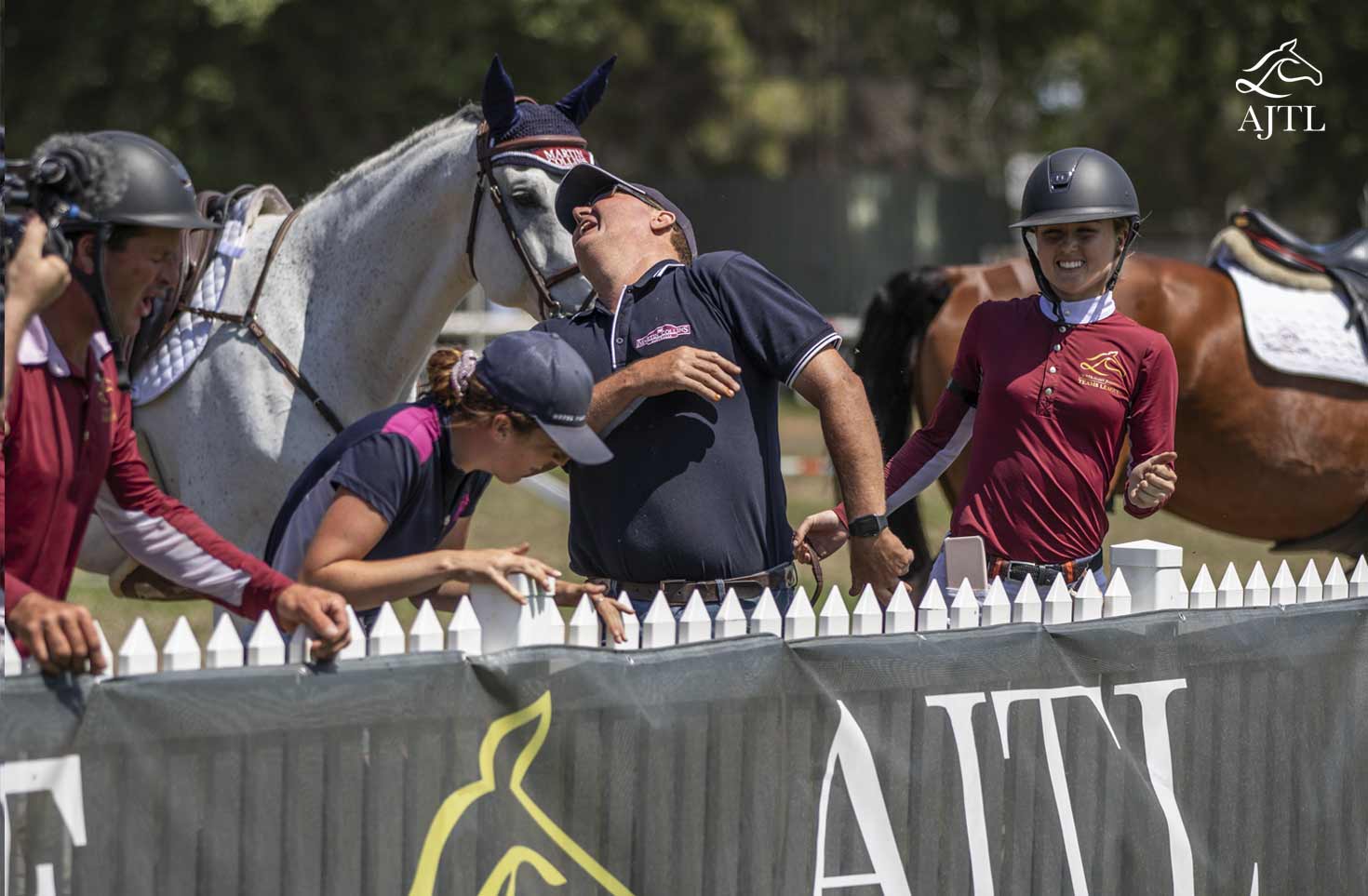 So Team Chatham Park (Amber Fuller, Amelia Douglass and Tom McDermott) took out the well deserved win as they were the only team to not take a rail during six individual rides. Team Willinga Park snuck into second place due to all three combinations in the second round going clear to finish on a total of four penalties, which tied with Team Emcee Apparel, however, Team Willinga Park recorded the faster aggregate time in Round 2. 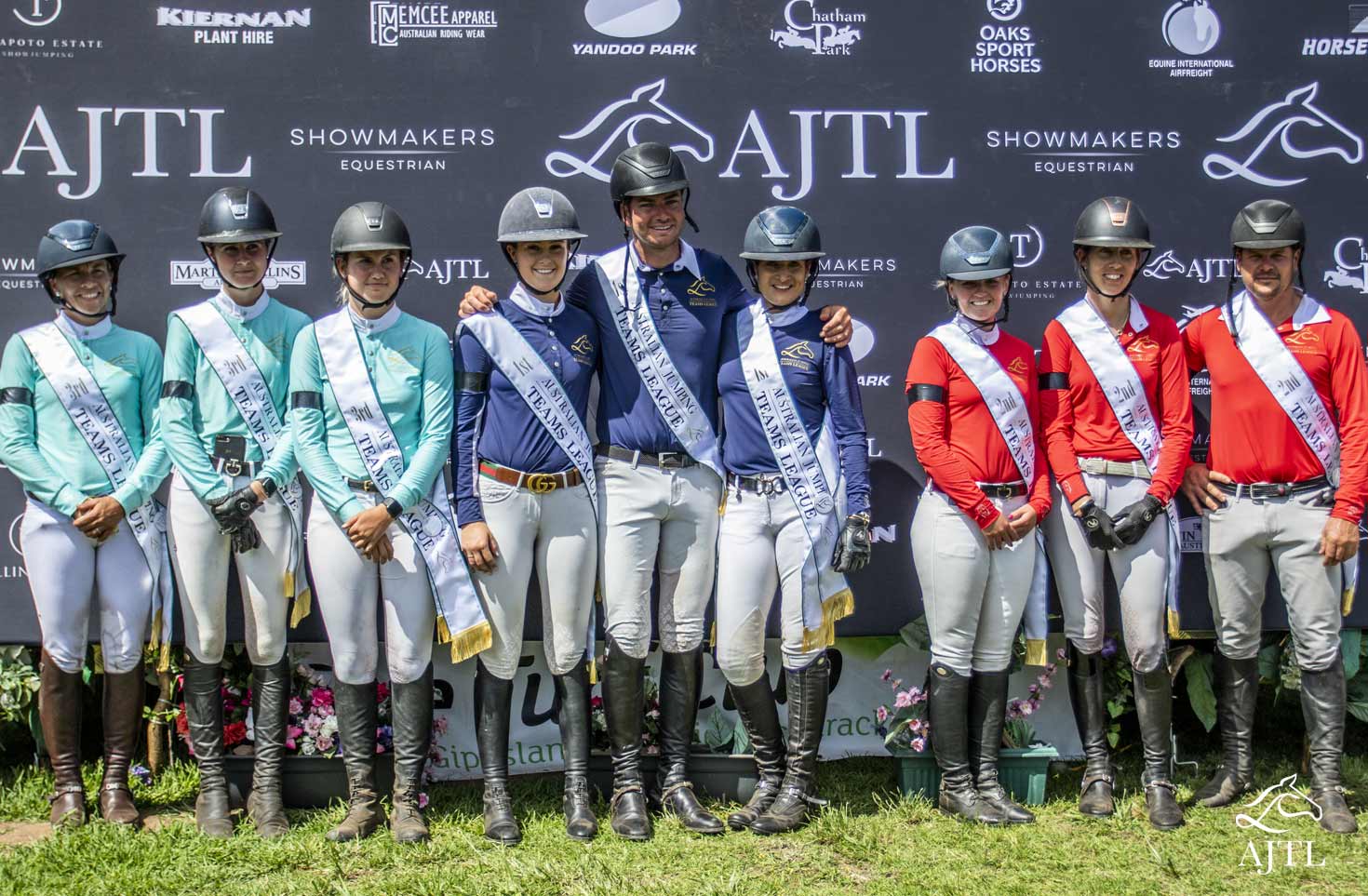 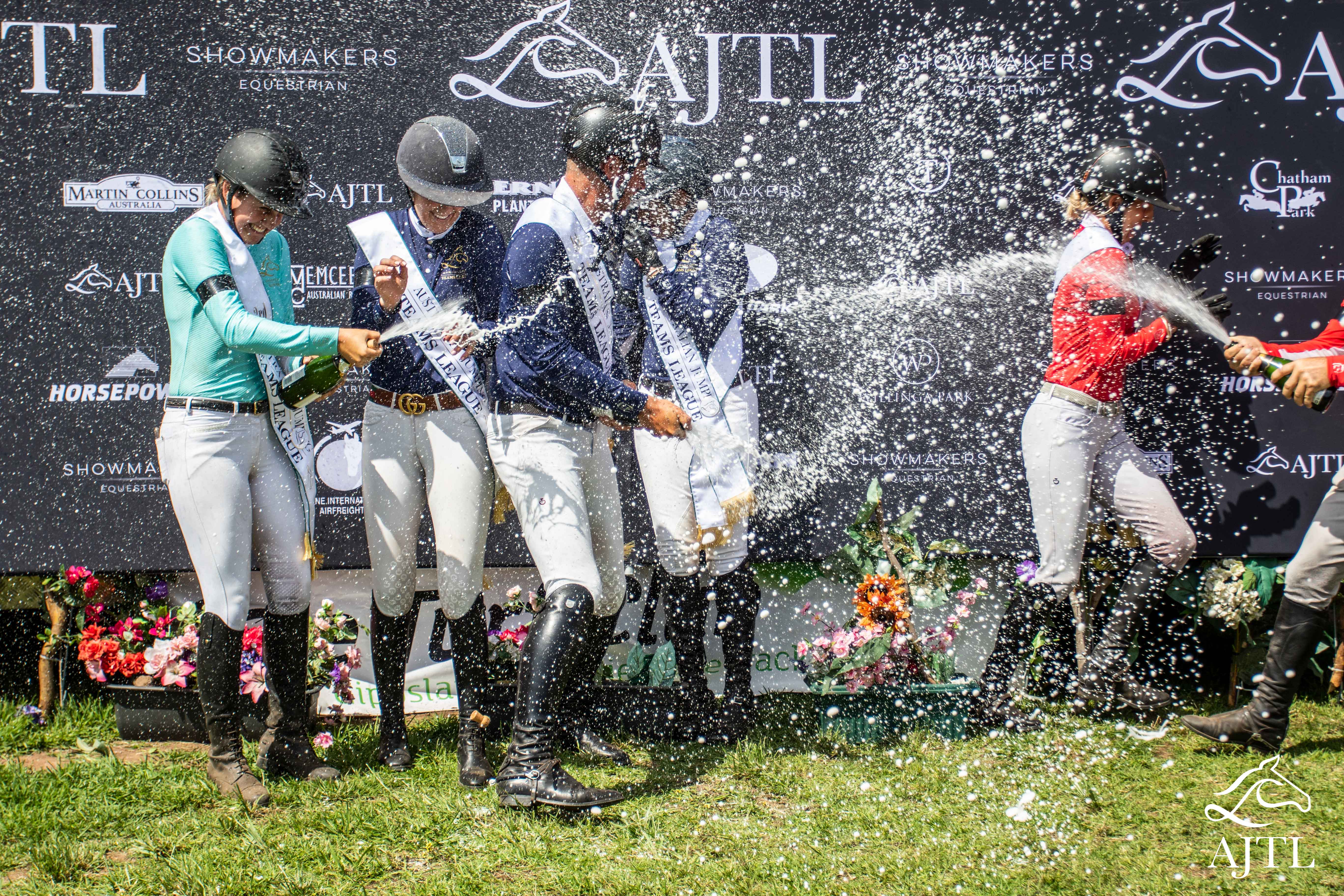 With Team Martin Collins Australia finishing fourth, fifth and sixth placings had to be separated based on aggregate Round 2 times and thanks to a super fast time by Olivia Hamood and Knockout 111, Team Takapoto Estate Showjumping finished ahead of team Oaks Sport Horses.

After Round Two, the penalty count for each rider was as follows:

*Chris Chugg was eliminated from the round and as a result, in accordance with AJTL rules, was allocated a score equal to the highest number of penalties incurred by any other rider, plus 20.

Based on these individual scores, team positions and totals after Round Two were:

The final results of today’s competition are as follows:

Below is the series point score after three rounds:

The win by Team Chatham Park has seen them improve from seventh place on the leader board to third, still some seven points adrift of the very consistent Team Emcee Apparel, who retain the lead. Team Willinga Park, who are yet to actually win a leg of the Series, sit comfortably in second place. These three teams would seem to have the best chances of finishing in the top three and taking home a share of the $80,000 bonus prize money on offer at the end of the series. With 20 points on offer for the win and minimum of three points available even for coming last in the fourth leg, there are still six teams who have a theoretical chance of winning the inaugural season of the Australian Jumping Teams League.

We look forward to the fourth and final AJTL event, scheduled for Sunday 8 December at SIEC after which we will know all the final placings.

In Honour of Carole Mason 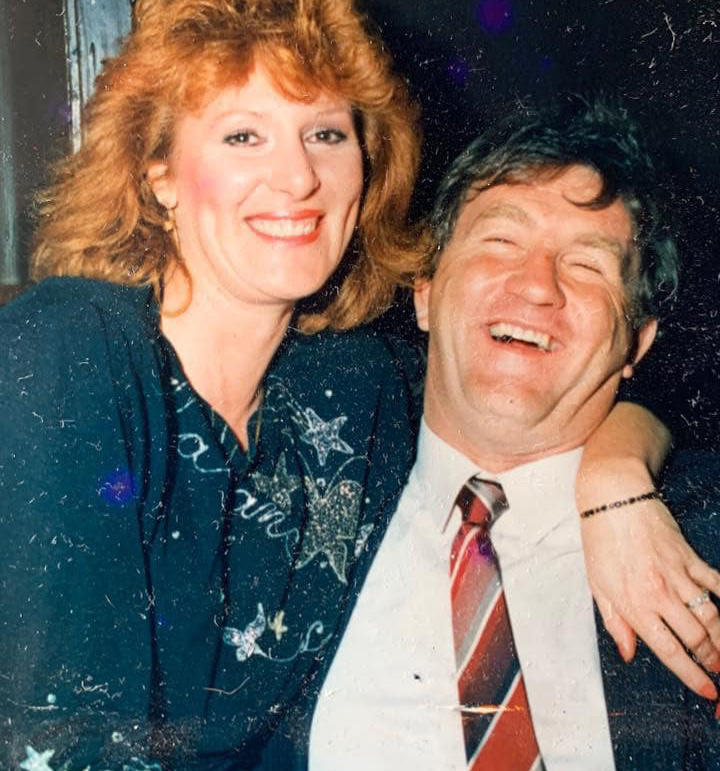